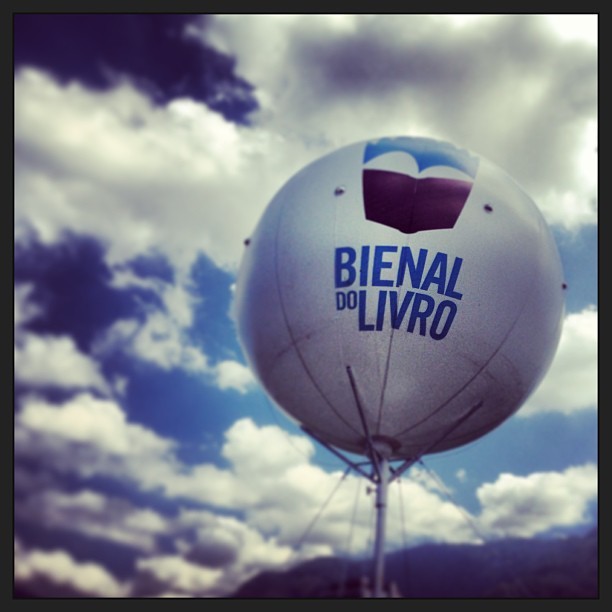 2 Seas Agency’s 2013 fall trip kicks off with a visit to one of the most vibrant publishing markets of the moment: Brazil.

2 Seas Agency’s mobile office has temporarily settled in the wonderful city of Rio de Janeiro. We were delighted to visit local publishers and attend Brazil’s international book fair, the Bienal do Livro, which takes place in Rio every other year (São Paulo hosts it the other years). Our São Paulo-based assistant Marcela Vieira joined us for a week filled with exciting meetings, publishing events, dinners, and cocktail parties.

During the first two days of our stay we withstood the mad Rio traffic and challenging public transport system to visit the offices of Rio-based publishers such as Rocco, Record, Zahar, Intrinseca, and Alfaguara/Objectiva. From August 29-31 we attended the Bienal, which was held in the Riocentro Exhibition Center in the suburb of Barra. Our busy program included meetings with such varied publishers as L&PM, Companhia das Letras, Pensamento-Cultrix, Verus, Planeta, Autentica/Gutenberg, Novo Seculo, Globo, Sextante, Bertrand, Abril, Novo Conceito and Vozes.

An impressive number of Brazilian readers endured the 1,5-hour commute to the Riocentro to buy books, attend one of the many conferences, and meet with their favorite authors. On the days the Bienal was open for the public, the dense crowd made it difficult for us to walk from stand to stand in between meetings! But we’re not complaining here: this is a sign that the Brazilian book market is very much alive, and we were particularly impressed by the large number of teenage readers.

Besides the big names in literary and commercial fiction such as, in the latter category, authors Nicholas Sparks and Sylvia Day who were both present at the Bienal, foreign titles that seem to sell particularly well in Brazil are non-fiction books. Among such titles included in the catalog Marcela had prepared for the Bienal, we received a great number of requests for religion & spirituality, self-help (particularly advice & relationships), business, and social sciences titles.

Another category we feel Brazilian publishers are looking to buy rights in is juvenile and YA fiction. We registered a lot of interest in fantasy as well as literary YA titles, whereas crime fiction doesn’t seem to be in demand with young adult readers. Government purchases currently represent more than 25% of the total revenue of Brazilian publishers (which, even though it’s in decline, still is a considerable percentage) and most of these purchases concern the educational sector. We’ve found that children’s books which discuss a certain theme (fear, jealousy, war, bullying…) are extremely popular.

We’ve just rounded up our follow-ups—fingers crossed we will be receiving some good news soon from the Villas-Boas & Moss Agency, who represent us in Brazil!

As I pointed out in one of our earlier articles, one of the advantages of attending a smaller international book fair is that you can take the time to discuss more than just your catalog with the publishers you meet—something which the 30-minute back-to-back meetings in Frankfurt don’t quite allow you to do! In general, you get to know the publishers on a more personal level, which helps create long-lasting relationships which are at the core of foreign rights sales.

Another advantage of visiting more “local” book fairs (see our International Book Fair Calendar if you need some inspiration) is that the number of attending international rights sellers tends to be relatively small. As a result, rather than trying to have a discussion at the over-crowded lobby of the Frankfurter Hof while being interrupted every 20 seconds, you can actually spend quality time together, share your experiences, recommendations, book fair stories, and of course, in Rio, some of the inevitable caipirinhas! At this occasion we met a couple of lovely rights sellers and scouts from the UK and Canada, which we’ll surely see again in Frankfurt, London,…

Another highlight of our stay in Rio was the traditional feijoada meal that our co-agent Luciana Villas-Boas had organized for us and some of her authors. Besides working as a co-agent in Brazil, the Villas-Boas & Moss Agency also represents Brazilian authors on the domestic and foreign markets. 2 Seas Agency is proud to be their co-agent in the Netherlands and the Nordic countries. We were delighted to meet in person some of the authors whose works we’ve been selling, such as Francisco Azevedo, Luize Valente, and Ronaldo Wrobel.

We’ll be saying goodbye to Rio again next week, taking with us many great connections, stories and experiences. Next stop: Paris, France!

PS: Check out our 2 Seas in Rio Facebook album to see images of our Brazilian experience!