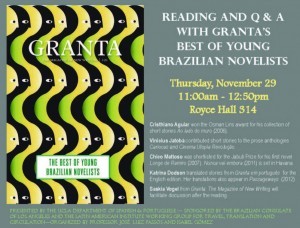 Posted at 16:39h in Articles & Advice, Brazil by marleen 0 Comments


It’s as if you can feel it in the air. A warm breeze blowing through the literary community carrying the whisper: Brazil. The international blogosphere is buzzing with talk of this up-and-coming literary powerhouse. Some of the highlights include: the announcement that Brazil will be the 2013 Frankfurt Book Fair guest of honor; a new study naming Brazil the 9th largest publishing market in the world; the launch of Machado de Assis Magazine at Frankfurt this year, a new literary magazine publishing samples of Brazilian literature in English and Spanish to promote foreign translation.

Adding to Brazil’s increasing international literary presence is the latest issue of Granta, Granta 121: The Best of Young Brazilian Novelists. This issue is the latest installment of the Best of Young Novelists series, which has previously introduced such authors as Jonathan Franzen and Salman Rushdie. The issue includes English-translated selections, mostly new stories, from twenty different Brazilian authors born from January 1972 on. The issue provides a snapshot of the current literary scene in Brazil and, excitingly, exposes a broad international audience to the literary works of top Brazilian authors. Indeed, this international attention on Brazilian publishing and literature seems to foretell a likely surge in demand for Brazilian literature in translation.

Granta, in association with the Embassy of Brazil and the University of California Los Angeles Department of Spanish and Portuguese and Latin American Institute, put together a series of launches across the US to promote this issue and to introduce some of the authors featured in it. I was fortunate to attend the launch held at UCLA and hear the lively and insightful discussion of the current state of Brazilian literature. The panel discussion also featured readings from the authors in Portuguese followed by the English translation, read by the moderator, Granta’s Saskia Vogel. Novelists Cristhiano Aguiar, Vinicius Jatobá, and Chico Mattoso participated in the panel, as well as translator Katrina Dodson, who played a key role in bringing Granta em português to an English-speaking audience.

One of the most interesting discussions the panel kept returning to, and a topic often considered with regard to books in translation, is the issue of cultural idiosyncrasies in the texts: does Brazilian literature translate and resonate with international audiences? What was fascinating about the authors on the panel is how they each emphatically insisted that their subject (at least in their Granta pieces and previous works) is not Brazilian culture or identity; rather, their works are concerned with larger themes such as death, love, and family. Aguiar conceded that, of course, culture and experience will always color an author’s work, and that setting and local color may imbue the story with distinctly Brazilian facets, but all of that is background to the primary concern of the story: universal experience.

The foreword to this issue of Granta, written by Roberto Feith and Marcelo Ferroni, echoes the panel authors’ sentiment: “This is a generation less interested than those that have preceded it in the question of Brazilian identity.…These young writers are also less interested in explicitly political issues such as inequality and ideology, which permeated much of the writing of their parents’ generation.” Mattoso explained that one reason for the lack of overt political themes in his literature, and perhaps for other young Brazilian authors, is that there is a “gap of experience” between his generation and the one before it. Mattoso’s parents were part of the generation that lived through extreme political turmoil, but the young Brazilian authors didn’t experience it themselves and, at least to Mattoso, Brazilians don’t talk about those struggles with the younger generation. Because of this, the influence of that political upheaval is only expressed in the literature as a more subtle, emotional undercurrent, rather than the focus of the narrative.

So what does this mean for Brazilian literature in translation? With a focus on universal themes, the work of this generation easily crosses borders and speaks to multinational audiences. Jatobá provided an anecdote that illustrates this point: At a Granta speaking engagement in the UK, an audience member approached Jatobá after the event and remarked that, when reading Jatobá’s short story “Still Life,” the reader felt that he was reading about himself, that the relationship among the family members and with the house was akin to his own experience. Reiterating Aguiar’s statement about universal themes, Jatobá felt that this was exactly the kind of response he wanted his readers to have, rather than to have international readers choosing to read his works simply because they think Brazil is a nice place they might want to go to on holiday. Along these lines, Feith and Ferroni give Granta readers a fair warning: “The stories here do not convey an image of an idealized, tropical nation.”

Despite their focus on universal human experience, the panel authors lamented that, at times, they face stereotypes and prejudices from international readers, critics, and media. Jatobá noted that when being interviewed by a Portuguese journalist, the topic of discussion kept returning to Brazilian politics because the journalist assumed that the theme of Brazilian literature inevitably focuses on political struggle. Another stereotype the authors have often faced is that Brazilians and their literature are excessively sexual, which also isn’t an accurate assessment of Brazilian literature or culture. There is hope, though, that as more international audiences read Brazilian literature, these preconceived notions will pass away, being replaced by thoughtful and informed literary discourse. Jatobá’s closing comment was a compliment to the audience, for their openness and unassuming curiosity in the literature of Brazil. He also charged both international readers and Brazilians with the responsibility of engaging in the important task of cultural exchange.

If you are like me and can’t wait to learn more about this growing literary phenomenon, here are some links to get you up to speed:

PS: Check out the talented Brazilian authors 2 Seas Agency represents in The Netherlands, the Nordic Countries and China, on behalf of Villas-Boas & Moss Agency!