Film and TV Adaptations from Books on the Rise: Shoot the Book! Los Angeles 2019

29 Nov Film and TV Adaptations from Books on the Rise: Shoot the Book! Los Angeles 2019

2 Seas Agency was in Los Angeles recently for the 5th edition of Shoot the Book!, which gives professionals of the American entertainment business a chance to talk to representatives of French publishing houses about film and TV adaptations of their books, and vice versa.

Barely two years have gone by since 2 Seas attended the 2017 edition of Shoot the Book! Los Angeles, but with the current developments in the entertainment (read: streaming) industry that may seem like a lifetime ago. That is why I decided to drive down to Los Angeles and immerse myself in the Hollywood atmosphere for three days earlier this month.

The 5th edition of Shoot the Book! Los Angeles took place from 18 to 20 November during the 33rd edition of AFI Fest, an annual 8-day event organized by the American Film Institute to celebrate the best movies from across the globe. 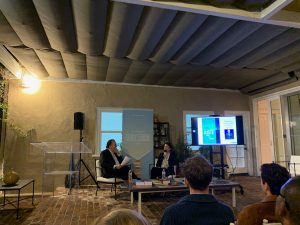 Editions Fayard’s Rights Director Carole Saudejaud pitching one of the selected titles from their list, with moderator Steven Gaydos from Variety

Shoot the Book! Los Angeles (STBLA), which has sister events taking place in cities around the world including Cannes and Shanghai, includes a pitch session during which French film & TV adaptation rights sellers present books that have been pre-selected for their potential as adaptations for film and TV, one-on-one meetings with movie professionals, and visits to production companies and talent agencies. This year’s selection of books focused on the crime and thriller genres.

It has always been difficult for French and other foreign film & TV rights sellers to capture and maintain the attention of Hollywood. The first hurdle also applies to US rights sellers: only about 10% of books that are optioned for film/TV rights are actually turned into a TV series or a movie.

The biggest challenge seems to be the language barrier, however. Without a complete English translation it is complicated for a foreign book to get optioned by an American producer. And, as much as foreign authors dream of being translated and published in English, it is the most difficult market to break into with regards to selling translation rights—despite the optimistic signs I pointed out in my article covering the New York Rights Fair earlier this year. But there may be a tiny light at the end of the tunnel… thanks to streaming platforms.

The disruptive force of streaming platforms

I already knew that, in their search for material, film & TV producers have increasingly been paying attention to books. 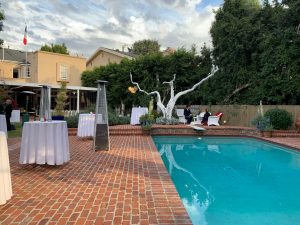 The Résidence de France in Beverly Hills: a very nice setting to have one-on-one meetings with people from the entertainment business to discuss film & tv adaptations

During the STBLA meetings I learned that in fact between 2006 and 2008, 11% of movies and TV series were originally based on a book. In 2016, this share had increased to a stunning 55%, and it surely has increased since then. The number of streaming platforms turned production companies continues to grow, and with it, the demand for good (and in the case of books: already vetted for) Intellectual Property. In the US, besides the usual suspects that include HBO, Netflix, Amazon Prime and Hulu, viewers can now also subscribe to Disney+ which launched earlier this month. A new platform called Quibi is set to launch in April 2020.

Streaming also seems to have turned the American TV & film market into a more international scene. Whereas producers used to only look at books that could be set in Chicago, New York, or other cities in the US, it is no longer unthinkable for a book that is set in Prague to be adapted into a movie shot in Prague. Foreign productions such as the French Netflix Original series 10% (Call My Agent in English) are finding an audience in the US. Netflix (again) works with Maria Campbell’s international literary scouting agency to find international gems to option. And it has paid off: one of the Italian books we sold in the Netherlands for the Malatesta Agency, Marco Missiroli’s Fedeltà was one of three Italian books they optioned earlier this year.

Continue the conversation between US producers and international rights sellers

In my opinion initiatives like Shoot the Book! Los Angeles are essential: it all begins with relationships, and getting to know the market from within. I intend to take part in the following editions as well—these are rapidly changing but exciting times for the entertainment business.

After three inspiring days in Los Angeles, I drove back to Ojai, my head bursting with ideas, my notebook filled up to the last page, and a full business card holder!