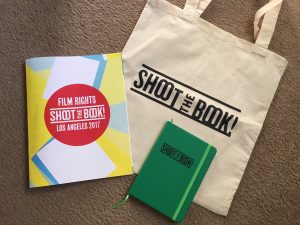 Early November, 2 Seas Agency attended the launch of the 3rd edition of Shoot the Book! Los Angeles, which gives professionals of the American entertainment business a chance to talk to representatives of French publishing houses about TV and film adaptations of their books. 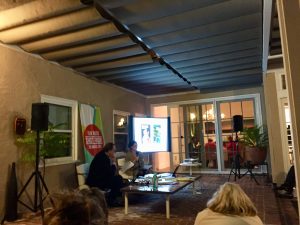 Diable Vauvert’s Marie-Pacifique Zeltner pitching one of her titles with moderator Steven Gaydos, VP, Executive Editor of Variety to her right

Since the 2 Seas headquarters are situated in Ojai, a mere 80 miles north-west of Hollywood, it was only a matter of time that we started venturing out into the exciting world of television and film adaptations. Adaptations of books have seen a surge in popularity in the last few years thanks to new streaming services and successes like The Handmaid’s Tale (a Hulu Original) and Orange Is the New Black (a Netflix Original).

Earlier this year, LA-based production company Atlas Entertainment hired us as their exclusive scout for the international book market. With successes like Wonder Woman, Justice League and American Hustle, they are on the look-out for quality IP written in English or any other language, and are currently considering works from among others Italy, Sweden, Germany, Taiwan and France. Their most recent acquisition is the best-selling Dutch memoir Judas (Lebowski) which they will adapt for television with Amblin TV.

Shoot the Book! L.A. is the US edition of Shoot the Book!, a program first created in 2014 at the Cannes Film Festival and which now also takes place in Toronto and Shanghai. Part of the American Film Market (AFM), it is a three-day event during which 5 French film & TV rights sellers meet and exchange with producers, studios, scouts, film agents and lawyers in Hollywood. 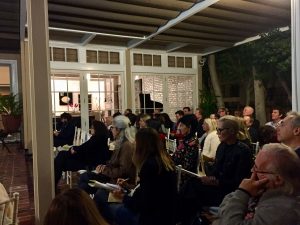 The French rights sellers came from an eclectic mix of publishing houses:

Though I knew several of the attendees, it was a great opportunity to see them again while making plenty of new connections in a wonderful setting: the residence of the General French Consulate in Beverly Hills. That evening I drove back to Ojai with plenty of new ideas and titles in mind… To be continued!