The Future of E-book Formats 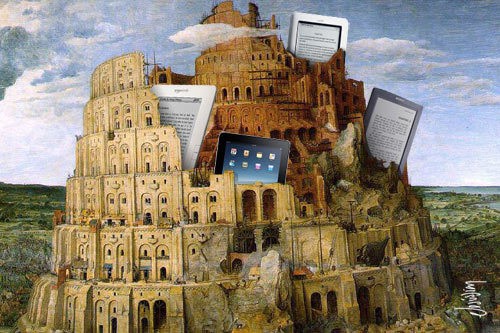 05 Aug The Future of E-book Formats

Posted at 13:16h in Articles & Advice, E-books by marleen 0 Comments

Which restrictions are imposed by the current diversity of e-book formats?

Last month’s article—The Future of DRM: The Saga Continues—broached the myriad of ways in which DRM affects publishers, authors, and readers. Inextricably tied to the DRM debate is the future of e-book formats. The current diversity of e-book formats and DRM restrict how e-book files can be read and used, raising a number of important questions. If you want to switch to a different e-reader (say, from reading iBooks on your iPad to reading on a Kindle), can you migrate your library? What devices available today will be available tomorrow? To the former question, there is a resounding “no,” unless you’re interested in stripping your files of DRM and converting the e-book file format and tempting the wrath of the Digital Millennium Copyright Act.

The second question, though, about the longevity of file formats and devices, is something that is a real concern and increasingly so as Amazon continues to dominate the e-book market. The Nook e-reader is a perfect case study in the instability of the e-book format landscape. Poor numbers have led Barnes and Noble to announce scaling back their Nook program. Rumors of Microsoft buying Nook Media were quickly dispelled earlier this year, leaving Barnes and Noble with a declining segment, a plan of cutting costs, all while still promising to launch the Nook e-bookstores internationally in 10 countries (though that has since been postponed). With the departure of Barnes and Noble CEO William Lynch, Nook’s performance and viability has come under renewed scrutiny. Publishers Lunch reported a substantial portion of a recent BN statement about the future of the Nook strategy, most notably that “the Company remains committed to continuing to have a premier digital bookstore” and that “Nook expects to continue to innovate and design best-in-class dedicated eReaders.” BN is looking for partners to produce “co-branded tablets with Nook content” to alleviate some of the risk associated with competing in the tablet market.

If BN decides to step away from the Nook device entirely, is it conceivable that the device might eventually cease to exist? BN also stated in that same release that “the Company’s digital strategy is to offer customers any digital book or magazine, any time, on any device,” which seems somewhat antithetical to a successful proprietary e-reader device program and also rather hard to accomplish in the eInk market—unless BN starts selling Kindle format e-books. Perhaps they only meant on any device…that supports a Nook app? Certainly, it is too early to tell what the future of the Nook will be, though it might give consumers pause when debating what e-reader device they invest in and the platform they build their e-library on.

Kobo provides an interesting vision of what Nook’s future could be. Kobo’s US market share took a significant hit after the demise of Borders, a major investor in Kobo. Interestingly, though, Kobo has been performing remarkably well in international markets since its 2011 acquisition by Japanese e-commerce giant Rakuten. In spring 2012, Publisher’s Weekly reported that Kobo held 50% of the French e-book market, though reports from earlier this year were more modest: “Kobo claims to sell up to 50% of the e-books in its home country of Canada and up to 20% of e-books sales in France, Italy, Australia, New Zealand and Brazil.”

Could the Nook have a bright future abroad? Or will it eventually go the way of HD DVD to Amazon’s “Blu-Ray” victor, Kindle? While last month’s post discusses the negative effects of DRM and lack of interoperability for publishers and booksellers, the reader will ultimately be the most affected if and when their e-book platform is left to fall by the wayside.