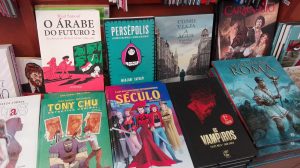 2 Seas initiated the New Year with some internal and territorial changes. From January 1st, we started directly selling translation rights in our catalogue to Portugal, i.e., without working with a local co-agent. As you may know, I lived in Paris and Scotland, but now I am based in Porto, and I have actually been living in Portugal for the past 3 years. I have met with Portuguese publishers at the Frankfurt and London Book Fair, and I have also attended the 2016 Lisbon Book Fair, but this change gave me the opportunity to further explore the Portuguese publishing industry.

From January 23 – 26 I was in Lisbon and visited a few independent Portuguese publishers, as well as the biggest groups. It is always important to meet with publishers during the book fairs, but it’s a different feeling to actually visit their offices, discuss calmly and directly with the publishers – without rushing for your next meeting – and leaf through the pages of their books. Building new relationships and strengthening those already established, with the publisher of our bestselling Dutch title —with translation rights sold to 35 countries— Attempts to Make Something of Life. The Secret Diary of Hendrik Groen, João Trinité from Presença Editorial, and Elisabete Lucas at Gradiva, who recently acquired the new title by Charles Pépin, The Virtues of Failure.

Publishers in Lisbon are not in the same district like they tend to be in Paris, where you can virtually find one in every building in the 6th arrondissement! So getting from one place to the other takes time and lots of walking. I organized my meetings to be in nearby areas, however I had to use Uber for the first time to reach groups in industrial areas like LeYa, Bertrand/Circulo de Leitores and 20|20. I also arranged meetings in other districts in cafés, since it was impossible to visit their offices without a car.

Sardine for breakfast at Chiado Caffé.

Working in a virtual environment doesn’t give me many opportunities to practice my Portuguese, so I was a bit stressed on having to pitch titles in another language, other than English. However, everybody welcomed me cordially and were interested in learning more about me and how I ended up in Portugal, obviously about 2 Seas Agency and our books! My first day of meetings went well, but I was struggling with some words in Portuguese like “fazer o luto” (grieving) and “amemantação” (breastfeeding), but by the second day I was already on the right track. It was great that nobody mentioned anything about my “Spanish” accent, and I received compliments for my vocabulary and good articulation!

All the publishers were open to questions, sharing detailed information about their editorial lines, their struggles and their successes, their concerns and their hopes. I saw books with great designs, exceptional paper and artwork, and also more commercial ones, with covers like the ones we find in other European countries. What is selling the most in Portugal is commercial fiction, especially women’s fiction, historical novels and psychological thrillers, and in the non-fiction list self-help, economy, history, MBS and diet books.

Portuguese edition of The Arab of the Future by Riad Sattouf. (Teorema, LeYa)

The Portuguese publishing market has seen a steady decline between 2008 and 2013 but the value of sales increased in 2014 and 2015, experiencing in the latter year a rate of change of 3.9% and standing at 345 million euros. However, based on the figures below, provided by GfK – which cover only the 80% of the total sales (excluding school books and text books) – the book market despite the small glimpses of improvement, still hasn’t recovered from the 2008 crisis.

Livraria Betrand Chiado. The oldest bookstore in the world still in operation.

As a result of the crisis, print runs also suffered reduction. Small independent publishers choose the safe option of short print runs of 500 to 1000 copies, while bigger publishers are publishing the minimum 1500-2000 copies necessary to secure visibility at the bigger chain bookshops like Fnac and Bertrand. Since window and point of sale advertisement is paid and reserved for the most commercial titles, it is impossible for small and medium-size publishers to compete. Ensuring visibility at a bookshop may cost between 3,000 to 4,000 euros. The biggest groups, in addition to having more money for marketing and advertising, own bookshop chains as well. Porto Editora, together with the Bertrand bookshop chain, acquired WOOK—the biggest online bookstore in Portugal—, strengthening the publisher’s position in the online arena. LeYa also owns ten bookshops across the country. Worth mentioning, the bookshop Livraria Ler, owned by editor Luís Alves at Editorial Bizâncio, is a small gem and a privileged piece of tradition in the history of the Campo de Ourique district.

Time to catch up on emails in between meetings at Grupo 20l20 Editora.

My discussions underlined the importance of independent publishers in the Portuguese publishing scene, not only for the development of the editorial activity from about the revolution of 25th April 1974 until the present, but also for their value in the continuity of translating literary works. I’m delighted to say that a great number of our titles caught the interest of Portuguese publishers mainly in the area of accessible philosophy, meditation, business & management, MBS, biographies, historical and crime fiction.

I would like to thank all the publishers who offered their valuable time to meet with me, and I look forward to new collaborations and opportunities in Portugal. 2 Seas Agency will continue to inform you about our clients’ new titles, and I remain at your disposal for any information and/or material that you may need.