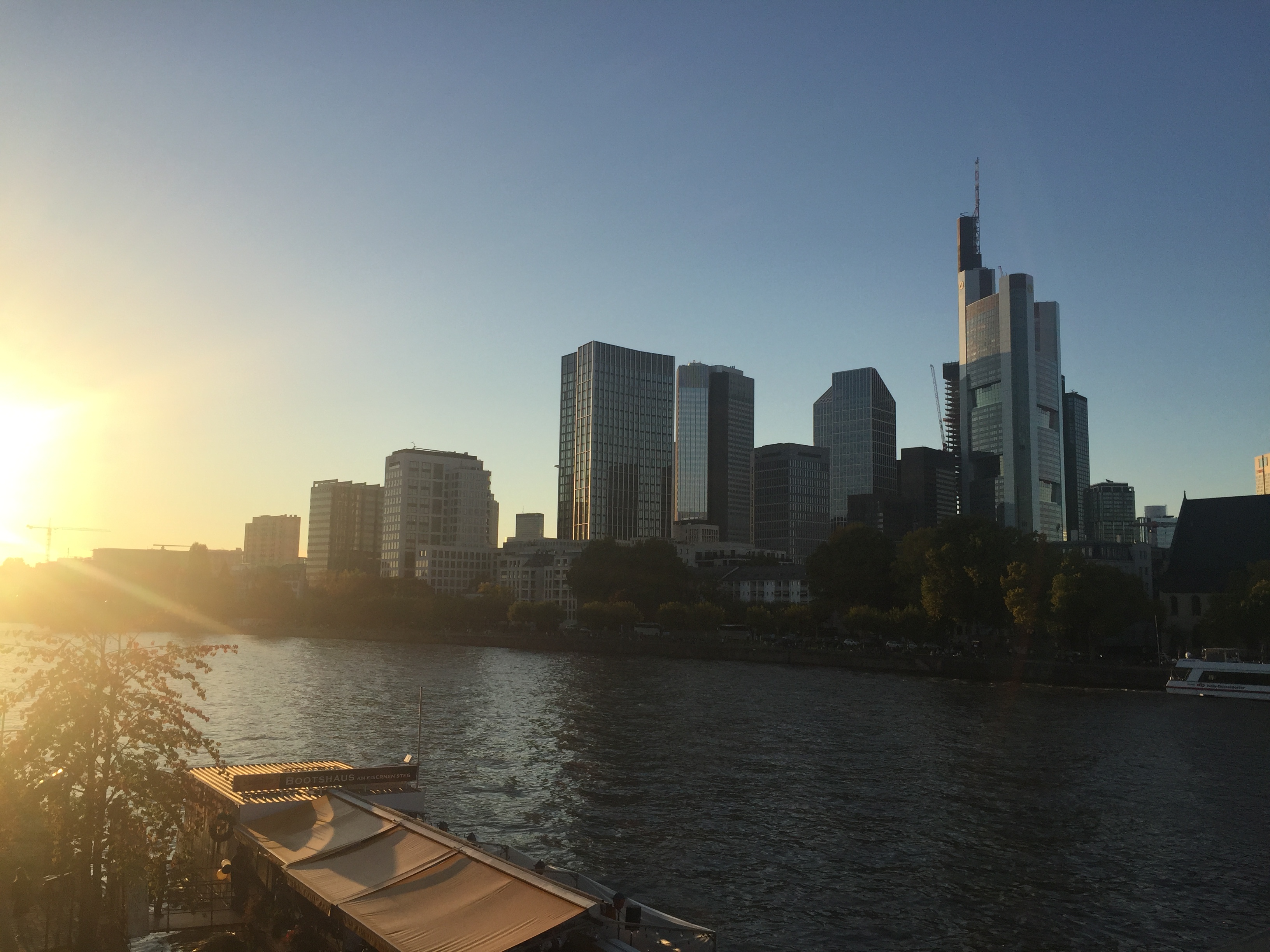 This year’s Frankfurt Book Fair was accompanied by surprisingly hot and sunny weather, with temperatures reaching 25 degrees Celsius. International publishers, agents and scouts were in good spirits and plenty of deal-making happened before and during the six days that the 2 Seas team attended the Fair. 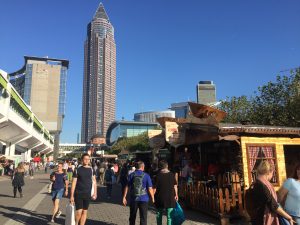 I had definitely not anticipated an Indian summer in Frankfurt while packing my suitcase for my bi-annual European tour five weeks earlier. My winter coat — which always needs some dusting before I leave for Europe — remained in the vacuum-sealed bag inside my suitcase (one of my packing secrets).

It’s a rare sight at the Frankfurt Book Fair: meetings taking place on one of the terraces outside rather than inside one of the many exhibition halls. People enjoying the sun instead of staring into the fluorescent lighting of the Agents Center. Inside, the hallways were a little less crowded, and in general the atmosphere was upbeat.

That mood changed swiftly whenever the planned re-locating of the Agents’ Center (LitAg) was brought up: the Frankfurter Messe, who owns the fair grounds, is starting a renovation during which significant parts of the complex will be closed and rebuilt over the next few years. In light of this, an email was sent on October 5 to announce a temporary move of the LitAg from hall 6.3 to the Festhalle. Agents, scouts and publishers were furious about the loss of time this move brings about: Hall 6.3 is adjacent to the exhibition halls whereas the Festhalle could be a 10-minute commute, or more. This might not seem a big deal but when all day long, you have back-to-back meetings that last barely 30 minutes, this could in fact have a huge impact. A petition was started to object to the move, but after a committee of agents and scouts met with the Frankfurt Book Fair organizers on October 12, everyone agreed that the relocation cannot be avoided given the massive reconstruction of the fair grounds in the years ahead. I’ll make sure to discuss my impressions in next year’s article covering the Frankfurt Book Fair! 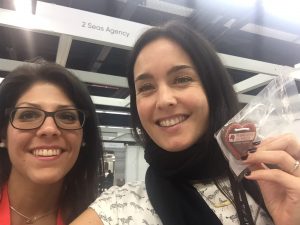 With Jr Agent Chrys: tired but happy, another successful Frankfurt Book Fair behind us!

Several foreign rights deals we arranged were closed in the days running up the the Frankfurt Book Fair, in so-called pre-emptive offers. Pre-fair pre-empts have become a quintessential part of the fair buzz, as I already discussed in my article covering this year’s London Book Fair.

One of our Hot Frankfurt Book Fair titles was A Short Philosophy of Birds (Petite philosophie des oiseaux) which we represent worldwide on behalf of Editions de la Martinière Littérature. While I was visiting publishers in Munich a few weeks earlier, German rights were pre-empted by Droemer Knaur. A few days before the start of the fair, world English rights were pre-empted by WH Allen/PRH UK (covered in The Bookseller), followed by a Dutch pre-empt (Kosmos), and multiple publisher auctions in Spain (Grijalbo), Italy (Solferino), and Korea (Darun). At the time of writing, a Greek offer is also in, and during the Frankfurt Book Fair we received interest from around the world for this charming nature-writing-meets-philosophy book.

The Frankfurt Book Fair becomes really fun -yet intense- when publishers come to your table in between meetings to deliver a pre-emptive offer. This happened with our second ‘hot’ title of the Fair: The Children’s Train (I Treni dei Bambini), an Italian novel forthcoming with Einaudi Stile Libero which we represent in several territories for Alferj y Prestia Agenzia Letteraria. Dutch rights were pre-empted on the eve of the Fair (Xander), and during the fair we accepted pre-empts from Sweden (Norstedts) and Norway (Gyldendal Norsk) while we also received a first offer for Portuguese rights (Porto Editora ended up winning the auction). 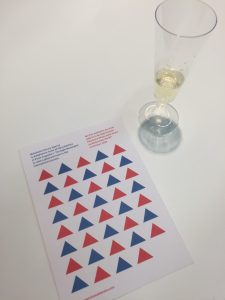 During our Frankfurt Book Fair meetings we received a lot of interest for non-fiction titles, a trend we’d already felt at the 2018 London Book Fair. International editors also often mentioned a lack of good fiction from the US, and we noticed a surge of interest for fiction from non-English language countries. We were glad to see this shift, considering the fact that most of the fiction we represent is originally written in languages other than English!

In fact, during my meetings in Amsterdam at the end of September, Dutch publishers spontaneously asked me to tell them about fiction from Italy, France and Brazil. That was a first! In the Netherlands however, two additional factors are at play…

First of all, there’s the ‘Cognetti-effect’: De Bezige Bij sold an impressive 200,000 copies of Paolo Cognetti’s Le Otto montagne (The Eight Mountains). Rights of this Italian novel were sold to 39 countries(celebrated during a nice cocktail party in Frankfurt, organized by his agent Malatesta Agenzia Letteraria), and it’s been awarded several critically acclaimed literary prizes. Yet sales of the Dutch edition are by far the highest compared to any of the other countries, and the book is still present in the Dutch Bestseller 60 since its publication more than a year ago. Paolo was invited by the Dutch Foundation for Literature as a writer-in-residence in Amsterdam while I was visiting the Dutch capital. As his Dutch sub-agent representing Malatesta Agency, I was honored to meet him in person and attend the ‘Book & Master’ interview conducted by Dutch author Ernest van der Kwast. A wonderful talk between these two talented authors, for which a big crowd showed up! During my trip in Europe, De Bezige Bij was quick to acquire Paolo’s forthcoming title Senza mai arrivare in cima, to be published on November 6 with Einaudi in Italy.

As a result, Italian authors specifically are more in demand than ever in the Netherlands. Yet there’s another reason why Dutch publishers are looking for non-English language fiction: the ever-growing competition of English books on the Dutch market. For this reason, Dutch publishers often need to publish their translation simultaneously, if not earlier, than the original English edition. I already pointed this out in my overview of the Dutch book and publishing market in the summer of 2016. The number of English books on the Dutch market continues to grow, and during my visit to the Netherlands I noticed English books have an increasingly prominent position in Dutch bookshops — and not only in the bigger cities. What is more, the English edition, which does not have a fixed book price, is priced a few Euros less than its Dutch translation, which is subject to a fixed book price, making it even more attractive for Dutch book buyers to buy the original English edition. Italian, French, and Brazilian titles do not represent any such competition when they are translated into Dutch. 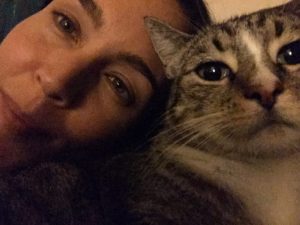 Happy to be back home after 5 weeks of meetings! I just did the math: divided between Munich, Paris, Amsterdam and the Frankfurt Book Fair, I had no less than 192 scheduled appointments. This number excludes spontaneous encounters, cocktails and dinners.

As you can imagine, I locked myself up in my house to catch up with sleep, give my voice some rest, oh and yes of course, take care of my meeting follow-ups. For an entire week, the only social interactions I had were with Millie our office cat — my husband being out of town 🙂 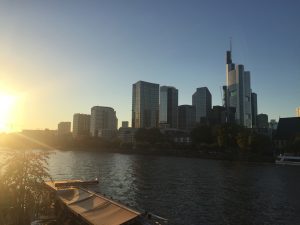 Strolling around in sunny Frankfurt… 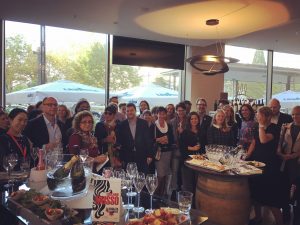 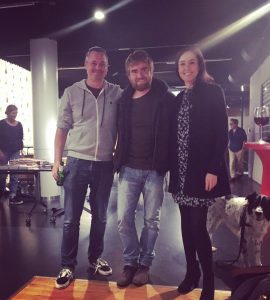 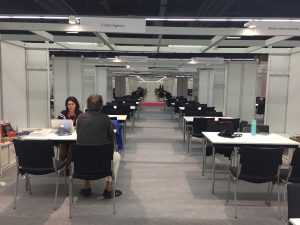 Chrys going strong on Saturday, in an almost deserted LitAg!