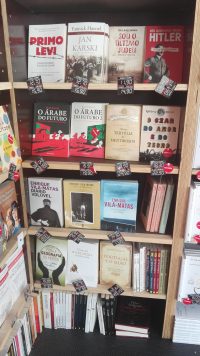 The annual Lisbon Book Fair, or Feira do Livro de Lisboa, which has been running for almost a century, took place between June 1 and 18 2017

According to APEL (Associação Portuguesa de Editores e Livreiros), during the 2017 Lisbon Book Fair a record 286 stalls (8 more than in 2016) were set to showcase publishers’ products to visitors, leading to a total of 122 participants, 602 editors and imprints over a million book signings, and 1618 events.

A few months have passed since my last professional visit in Lisbon, and I was curious to see what this year’s Feira do Livro de Lisboa had to offer and what publishers had to share about the book market in Portugal.

The Lisbon Book Fair is the biggest showcase of books in Portugal, and, for the past 87 years, large and small-scale companies have gathered together to offer great deals on their current stock and also their newest titles. Book lovers wait for this moment to discover treasures hidden among thousands of volumes and to stock up books for their holidays or for the rest of the year.

The Lisbon Book Fair 2017 was bigger than ever at all levels. There were more participants, more pavilions, and 602 editors and imprints, when last year, there were only 586. The APEL counted over half a million participants, greater than the 480,000 people who visited the event in 2016. Additionally, the fair occupied half a plot more in Parque Eduardo VII, in addition to the 3 plots occupied last year.

The 87th edition of the Feira do Livro de Lisboa counted 10 new participants, raising the number to 122. Major publishing groups like 20 | 20 Editora, LeYa, Porto Editora, and Editorial Presença dominate the squares, but smaller merchants, from independent publishing houses to booksellers, were also present, spread through more than 200 pavilions.

For the first time during the last 9 decades of existence, the Feira do Livro opened on the Dia da Criança (Children’s Day) with a series of activities for the young readers with the support of the Municipal Libraries of Lisbon.

From January 1st, we started selling directly translation rights in our catalogue to Portugal, i.e., without working with a local co-agent. And it was great to have the chance to personally announce to some editors that we also have recently started working as a sub-agent in Portugal for two Italian literary agencies: the Laura Ceccacci Literary Agency and the Alferj e Prestia Literary Agency.

The Arab of the Future vol.1 + 2 at LeYa pavilion

I was happy to see some of our books at the book fair, like THE ARAB OF THE FUTURE by Riad Sattouf, whose third volume will be published by LeYa/Teorema in September 2017. The Portuguese edition of his comic ESTHER’S NOTEBOOKS vol.1 will be published in November 2017 by Gradiva Publicações. Not to mention how excited we are to have another Dutch title in Portugal; THE OFFICE LIFE OF A GUINEA PIG by Paulien Cornelisse to be published by Guerra e Paz in January 2018.

Additionally, two of our authors will be at the FOLIO – Festival Literário Internacional de Óbidos in October. Anaïs Barbeau-Lavalette, author of the bestselling and award-winning novel THE WOMAN WHO RAN AWAY, and Louis Bériot, author of the exquisite and original biography, COFFEE WITH VOLTAIRE (already published in Brazil by Autêntica), were invited to participate at this year’s festival, which is dedicated to the theme of Revolution, focusing on the role of literature as educator and development driver. The festival will be divided into 5 main areas with a focus on world literature and, especially, the relevance of books and literature on contemporary society.

Portuguese publishers are optimistic, as the book market seems to have stabilised, but they are still very careful, calculating every decision they make. From what publishers said, overall, Portugal has noticed a slight economic growth in the last couple of years, big enough for the Portuguese to consider other kinds of entertainment, putting books again in lower position. Holidays, eating out, technology, cinema become more accessible, leaving reading behind.

As Eduardo Boavida, editorial director at Bertrand Editora, member of APEL, and Director of the Lisbon Book Fair, says, “Portugal is a country with centuries of illiteracy and only four decades of extended schooling, […] and the Portuguese buy, on average, 1.3 books per year.”

And this is why the Lisbon Book Fair constitutes an important event. This year, the book sales at the fair showed a small increase. On average, every pavilion sold approximately 15 thousand euros in books, which is equivalent to 400 thousand books sold during the 18 days of the fair. Basically, 4 in 5 visitors bought one book. These sales correspond to a 4% of the book market in Portugal, as total sales in 2016 reached 14 million books.

Most of the publishers confirm that they sold approximately the same number of books as last year, which is quite good as participants were not that numerous due to the heat wave that struck Lisbon during the closing weekend. I had the “chance” to arrange my meetings those days under the strong sun of 42 Cº and was struck by how empty the fair was. I was grateful, though, to those publishers who braved the heat and accepted my meeting requests!

Good deals to snap up!

However, the couple of bank holidays coinciding with the fair, the Happy Hours for discounts in the evenings, and the weekends saved the commerce. There was a 2 to 3% minimum increase in 2017.

According to ECO, despite the fact that older books had more attractive prices, the visitors continue to prefer new releases, mainly books published in 2017. Publishers revenues at the fair are not all of what a publisher earns. Porto Editora speaks about “tangible and intangible” gains. It’s not only about the billing, but also about the environment and the relationships created with the readers, building a true book festival.

The Fair for International Publishers

While the fair itself is mostly focused on bookselling rather than foreign rights, it constitutes an opportunity for us and other international scouts, agents, and publishers to explore the Portuguese publishing scene and to meet with editors frequently based in other cities than Lisbon and Porto.

Last year, it was mentioned that the book fair would accommodate a space for foreign rights, but this is still not the case. However, this year, there were also representatives from 6 foreign publishing houses, invited by the AICEP, seeking to create international visibility for new Portuguese authors and to facilitate their translations abroad.

After the first instance last year, with 7 publishers from the UK and Germany, this year 6 publishers from Spain, France, and Italy (namely, Editora Regional de Extremadura and Editora PRE-Textos [Spain]; Actes Sud, Editions Gallimard and Flammarion [France] and Edizioni dell’Urogallo [Italy]) were also invited to investigate the Portuguese market closely.

The Portuguese Booksellers and Publishers Association decided to organise an event with books as the main character, one year after the Wall Street crash in the 30’s. During the last 9 decades, the Feira do Livro took place almost every year between May and July, surviving through dictatorship, war, revolution and economic crisis (again). And it’s been growing. Publishers are more optimistic; numbers are stable for some and better for others, and editors are open to translation projects. It seems that, after all, the Portuguese like to read!