3 days after Livre Paris (the Paris Book Fair, scheduled from March 20-23) and one day after the Leipzig Book Fair (scheduled from March 12-15) were both cancelled following the escalation of the COVID-19 Coronavirus in Europe, the London Book Fair finally pulled the plug “with reluctance” less than one week before its official start on March 10. All the while, 2 Seas Agency’s co-founder Marleen was visiting Dutch publishers in Amsterdam as part of her European tour.

To LBF or not to LBF?

The thought briefly crossed my mind just before I set off on what was to be a 5-week tour around Europe late February: is it a good idea to travel to Europe now that the Coronavirus is causing chaos in Northern Italy? After all, I was supposed to end my tour with a one-week visit to Milanese publishers after having met with Dutch publishers in Amsterdam, and been to the London and Paris Book Fairs. I quickly brushed my hesitation aside, thinking it wouldn’t become such a big deal. 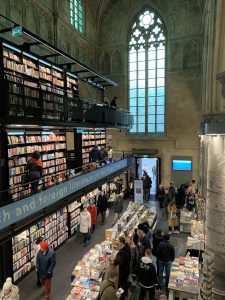 I also got to visit Maastricht’s beautiful Dominicanen bookstore

The day I landed in Amsterdam, the first case of the virus was detected in the Netherlands. A few days later, the French government banned all gatherings and events of over 5,000 people leading to the cancellation of the Paris Book Fair. American publishers and agencies started pulling out of the London Book Fair, followed soon by those from many other countries. The Leipzig Book Fair was then cancelled. An increasing number of people were demanding the cancellation of the London Book Fair, but its organizer Reed Exhibitions kept confirming it would be business as usual.

It was of course a big topic during my meetings in Amsterdam, the first leg of my tour. Overall Dutch publishers seemed very down-to-earth and set on participating in the LBF. I started to think about the consequences of a possible quarantine — I wasn’t keen on getting stuck in Europe without being able to fly back to the US.

As the week advanced, my LBF schedule was showing an increasing number of gaps following multiple cancellations. At some point, I was receiving a cancellation email every 10 minutes! My mind was going back and forth between going and not going. It is the second biggest international event of the year, during which I had 56 scheduled meetings, besides drinks and dinners. The financial implications were considerable as well, especially for an agency of our size.

Five minutes after I’d decided that both Sr Agent Chrys and I were not going to attend the LBF, Reed Exhibitions finally sent an email announcing the fair’s cancellation: “it is with reluctance that we have taken the decision not to go ahead with this year’s event.” Although I felt incredibly sad, I was also relieved. I knew this was the right decision that most people had been waiting for.

With the London and Paris Book Fairs cancelled, Milan in chaos, and the risk of not being able to return to California I quickly made up my mind: I decided to take the first flight back to LA once my Amsterdam meetings were finished. 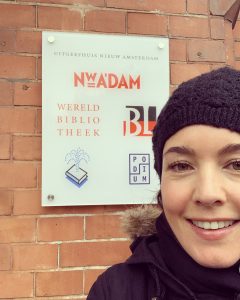 First meetings of the week!

Visiting Dutch publishers: what a week!

All the while, it was (almost) business as usual during my meetings with Dutch publishers. The Netherlands is one of our most important territories, both in terms of foreign rights sales and regarding foreign rights representation.

After the often longer-than-usual introductory talk due to the Coronavirus situation, my meetings went well. Dutch publishers sounded carefully optimistic, which has been the case during my most recent visits to Amsterdam. The Dutch market seems to be quite stable and I felt an overall curiosity for the mostly French, Italian, Scandinavian and Brazilian titles we represent. As I pointed out previously, there’s a growing interest among Dutch publishers for translations from other languages than English. Original English language editions are important competitors of their Dutch translations.

My meetings with our Dutch clients were also invigorating. Van Oorschot had just heard that two of their authors are among the six finalists for the most important Dutch literary prize, the Libris Literatuurprijs: Marijke Schermer’s Love, If You Say So and Sander Kollaard’s A Day In The Life of a Dog.

In between my many meetings, I was constantly in touch with Chrys about the communication and organization around our meeting cancellations and possible rescheduling to phone/Skype conversations. We also had to deal with cancellations, refunds (or not) and re-bookings of our travel tickets and accommodation in London and elsewhere. 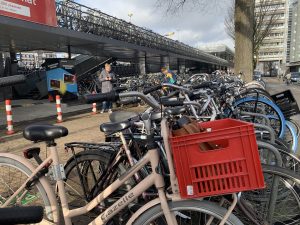 This picture was taken a short while before my bike (with the red basket) got towed away.. Looks parked correctly to me!

As if this rollercoaster wasn’t intense enough, I realized my bike had been removed from the bicycle parking after I finished a few meetings at Amsterdam Central Station. Apparently I hadn’t parked it neatly in the designated area, so the police cut the lock and took it to a warehouse somewhere in the outskirts of Amsterdam. Lesson learned: don’t mess with the bike parking system in Amsterdam!

While dealing with the above I missed a few meetings, which I’ll catch up with by phone/Skype shortly of course (you know me!).

In spite of all the commotion, my week in Amsterdam ended with a bang: our client Meulenhoff Boekerij invited me to come along to THE annual Dutch publishing event: Het Boekenbal. This gala evening rings in the yearly ‘Boekenweek’, a special, 10-day event organized by the CPNB (“Collective Promotion for the Dutch book”). You can find further information about this event in this post from spring 2019.

Held in the beautiful National Theater in Amsterdam, the ‘Boekenbal’ assembles Dutch publishing professionals, authors, journalists, tv personalities and more who come together to party. All. night. long. As I had to be at the airport at 7am, I hit the hay at 2am while the party was still going at full speed.

I got a chance to speak to several authors 2 Seas represents and has sold abroad on behalf of Meulenhoff Boekerij during a cocktail reception held prior to the gala. A perfect way to end the week!

As soon as the cancellation of the London Book Fair was official, people started talking about a ‘virtual LBF’. As 2 Seas Agency already sports a virtual office, this is perfectly up our alley!

Since I returned to Ojai, I’ve been scheduling and having phone calls and Skype conversations. My mind is still on European time and as a bonus, the United States went to daylight savings time over the weekend so the time difference is negligible.

As a final thought, I sincerely hope we’ll all get to the end of this crisis sooner rather than later. Stay calm, and stay healthy!

PS: Some pictures taken during the ‘Boekenbal’: 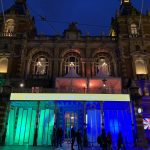 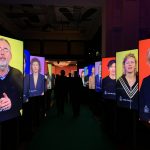 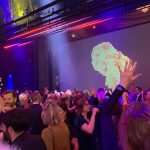 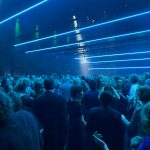 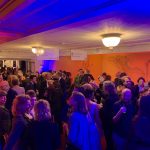 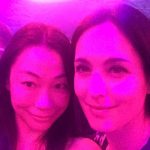 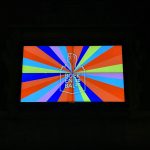