Spotify: The Future of Books?

01 Dec Spotify: The Future of Books?

Posted at 23:07h in Articles & Advice, E-books by marleen 0 Comments

Is the subscription model the future of books?


A new topic of discussion has risen to the fore in the tumultuous industry speculation on the future of digital publishing: subscription. Given the success of subscription services for other media—such as Spotify for music, Netflix for video, and recently launched Next Issue for magazines—the next step seems to be that books, too, will join the online subscription revolution. What does consumer adoption of these subscription models actually look like? What can publishers learn from these other media services in terms of business models, pricing, and partnerships? Perhaps most importantly, what are the financial implications of the subscription model for the publishing industry?

IHS Screen Digest Research released the results of a study that analyzed consumer movie spending and watching online versus physical format (VHS, DVD, and Blu-Ray). This study in particular, which considers only movie buying and viewing patterns, is more analogous to the book market than other studies that cover the viewing trends of all professionally produced video content (as in this interesting white paper from Cisco Internet Business Solutions Group). Focusing on movies—self-contained, non-serialized video content—and how consumers are moving from physical purchases to online streaming subscriptions may give a glimpse into what publishers can anticipate.

According to projections made in the March 2012 report, Americans will purchase or rent 3.4 billion movies online annually, up 135% from 2011, compared to only 2.4 billion physical unit transactions. IHS analyst Dan Cryan writes,

“Key to the surge in consumption of online video has been the rise of all-you-can-eat subscription services such as Netflix and Amazon Prime, which offer customers unlimited on-demand movies for a flat monthly or annual fee. The result is that subscriptions in 2011 accounted for 94 percent of all paid online movie consumption in the United States, compared to just 1.3 percent of units consumed that were bought on an ownership basis via electronic sell-through.”

It isn’t just that the growth in video subscriptions is increasing at an exponential rate, however. The numbers of current paying subscribers for all media subscription services are already significant. Consider the following:

In the face of the staggering user adoption of subscription model services for media consumption, it seems almost incontrovertible that the future of book media is headed in the same direction. Some publishers, sensing this eventuality, have already made their move into the subscription market.

In a recent TechCrunch article, Sara Perez provides an insightful analysis of the pros and cons of four ebook subscription services (Oyster, Scribd, eReatah, and Amazon Prime), which I encourage you to read. Perez weights concerns of accessibility on any device, cost, social community components, and additional services and even provides a handy chart. 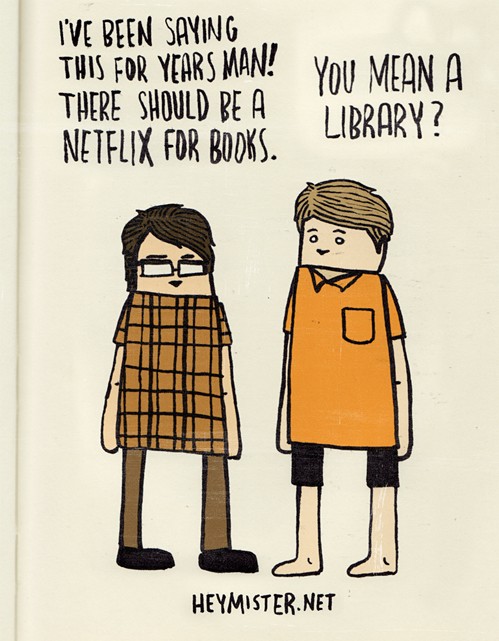 What is more intriguing, perhaps, are a few sobering issues that Perez points out, which may impede the success of any ebook subscription service. In the first place, ebook subscriptions services in the US will have to compete with libraries that allow patrons to borrow ebooks for free. Perez also points out that the monthly cost for subscriptions to services like Netflix or Spotify run about as expensive as the cost of a single ebook, so a subscriber would need to read more than one book a month to make it worth the cost. A reader that would subscribe to such a service would 1) need to read more than one book a month, and more likely several books a month, 2) be inclined to read in ebook format, 3) would need to use a device that supports the service, as in the case of Amazon, and probably also 4) be interested enough in the technological bells and whistles—like book suggestions—and social community aspect of the service to use the service instead of the library or purchasing ebooks outright. When considering these attributes, one has to wonder how many readers would fit this profile and does it warrant the creation of one or more subscription services? For Perez, at least, “Netflix for ebooks” is a tough sell.

What should worry publishers most is that subscription models don’t rake in the revenue. In the case of movies from that same IHS report, Cryan predicts that online stores and services will account for 57% of movie consumption in 2012, but only 12% of spending. According to IHS, the dollar breakdown in spending on movies is anticipated to be $1.72 billion on digital movies, compared to $11.1 billion on DVDs and Blu-ray discs. Cryan concludes that “the result would be a net decline in home entertainment revenue even as consumption reaches previously unattainable heights.” According to the report, “this is because consumers will pay an average of 51 cents for every movie consumed online, compared to $4.72 for physical video.” Unless a more profitable subscription model for ebooks could be devised, it seems that publishers should rejoice in Perez’s conclusions about the improbability of ebook subscription services actually being successful.

It is also important to note that ebooks are still only a small fraction of book consumption, even in the US, and that ebook sales have actually been slowing this year. According to Publishers Weekly, ebook sales have slowed over the first half of 2013 and only account for 14% of consumer spending on books. Consumer adoption of the ebook format will need to reach a larger critical mass in order to support a sustainable and profitable ebook subscription service.

Still, it is too early to say whether subscription services are the future for books and it would be unwise to say, unequivocally, that the subscription model would never work with books. Consumer behaviors are ever changing and, at some point in the future, such a service might make sense. At this point, such services seem premature.