How does Scotland make its place in the international publishing scene? An insight into the country’s publishing industry and its newly launched International Fellowship Program

By Giulia Trentacosti — Article first published in May 2016

For our Publishing Industry Insight Series I finally decided to take a closer look at the country that has been my base for the past 4 years: Scotland.

It’s no wonder that in 2004 Edinburgh became the first UNESCO City of Literature in the world. In fact, it was in Edinburgh that the whole idea of creating a worldwide network of Creative Cities under UNESCO’s umbrella was conceived. Since 2004, 20 cities have joined the network, following the footsteps of the Scottish capital. To find out about all the initiatives organised by the Edinburgh City of Literature Trust, have a look here.

Edinburgh is also home to the world-famous International Book Festival, the largest literary festival in the world, taking place during the last 3 weeks of August. Hosting more than 750 events every year, the book festival coincides with the acclaimed Fringe Festival and the Edinburgh International Festival, thus making Edinburgh the place to be in August for all art enthusiasts.

As if hosting the largest book festival in the world was not enough, Scotland also boasts the highest number of book festivals per capita in the world. There are around 40 events taking place in the country in the most disparate locations during the course of the year (find out more about Scottish festivals here).

To get a better understanding of Scotland’s love for books and of the peculiarities of its publishing scene, we interviewed Marion Sinclair, director of Publishing Scotland, the network body for the Scottish publishing industry.

Giulia: Can you give us an overview of the Scottish publishing scene?

Marion: Publishing Scotland has roughly 60 publisher members and we estimate that there are maybe 20 more active publishers of varying sizes in Scotland. I think that the number of publishers has stayed fairly static over the last 25 years, so when companies have shut down other start-ups have taken their place. We also have about 40 members in the network category.

Publishing houses in Scotland are mainly small businesses, even though there are a couple of very big companies that are part of larger media and newspapers conglomerates: those are Harper Collins in Glasgow and DC Thompson in Dundee. After them there is a big gap in terms of companies’ size and turnover. Canongate would be the third biggest in terms of turnover, but not in terms of staff.  Most Scottish companies employ fewer than 20 people and some of them are very small and are generally defined as microbusiness. We also have a lot of start-ups which tend to have 1 or 2 staff members. Most of the companies in Scotland are independent even though around 10 of our members are publishing arms of larger heritage institutions, for example the National Galleries, the National Museums, Glasgow Museums, Historic Environment Scotland.

Traditionally Scottish publishers have been based in Edinburgh, which was known in the past to be a fairly sizeable publishing city, probably the third in the UK after London and Oxford. In the 1990s Glasgow started to produce more publishers and now we have almost as many members on the west coast as we do in Edinburgh. The remaining companies are scattered around Scotland mainly in towns and villages, but some of them are based also in more rural areas like the Isle of Lewis, South Uist, Orkney, Shetland, and so on.

G: How does the Scottish book market relate to the UK and European publishing scene?

M: I guess Scottish publishers relate to London for selling rights and also share personnel, since some Scottish publishers have offices in London and vice versa. We can say that there is a little of coming and going between Scotland and London, but essentially, because of the size of our companies, Scottish publishing exists fairly independently of London.

At the European level, again because of our size, we usually compare ourselves with countries like Ireland,  Norway and Denmark. I suppose the most relevant comparison is the one with Ireland since they also publish in English, while other small countries in Europe publish in their own home language. Clearly there is a big difference in publishing in English since the market is enormous and the competition is huge. 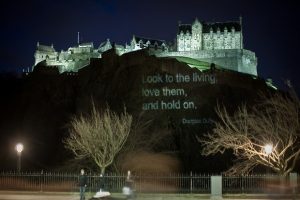 G: Many important authors are either Scottish or Scotland-based. How many of them are staying with Scottish publishers?

M: Many of the bestselling writers  don’t stay with Scottish publishers. Some of them start their career here but then, if they had some degree of success, tend to move on after 1 or 2 books. I think I can count on the fingers of one hand how many well-established, internationally-known authors are published by Scottish companies. For example, one of our publishers might lose an author to Faber and Faber, Jonathan Cape or Harvill Secker. I think it’s not only a matter of money, but also a question of having a wider marketing reach and of being published by a more prestigious company. As you can imagine, this situation has an effect on the publishing scene here. It is not like with football where you actually get some cash for selling a player – publishing doesn’t work that way. So what happens is that you invest in your authors, you spend a lot of time discovering, nurturing and getting them to a certain stage and then you lose them to another publisher.

G: What the state of arts funding in Scotland? Are subsidies Scotland-specific?

M: Culture is a devolved issue, so the culture budget is held in Scotland and administered locally, mainly by Creative Scotland (which used to be called the Scottish Arts Council), but also by other bodies. If you are in the creative industries you might get some help on skills, digital training or business development from Scottish Enterprise or Skills Development Scotland. These are Scottish bodies that don’t necessarily have an equivalent in the rest of the UK.

Overall, I think that the funding regime has not been bad at all in the past 20 years. There are many publishers that have published a lot of fine authors and good books thanks to Creative Scotland’s subsidies. On the whole, most of the literary publishers that are trying to break debut authors or to publish non-commercial books have been able to get some funding from these bodies. I would say that the scene is fairly healthy, even though there is never enough funding to satisfy demand.

G: Publishing Scotland recently started a Fellowship programme. Can you talk a bit about that?

M: Publishing Scotland is pursuing a number of strands for the future; one of them is definitely internationalization and that is why we started the International Fellowship programme. The Scottish market is small as there are only 5.5 million people living in Scotland. If you are publishing for this market specifically the opportunities for growth are not enormous. It is therefore important for our publishers to look beyond our borders and to produce books for a global market. With the advent of digital publishing you can sell English-language e-books anywhere, but it is important that our publishers are selling the right books for the international market, that they have the right connections and that they are able to make themselves visible.

We felt that traditional book fairs are often very fast-paced environments that don’t really leave much space for relationship building. We set up the Fellowship to facilitate the networking experience for our members. The fellowship enables a group of 10 international publishers – it was 8 last year – to visit Scotland for a week in August during the Edinburgh International Book Festival. During this week, we organize meetings with Scottish publishers in a more relaxed setting, allowing our guests to get an idea of what Scotland has to offer culturally.

We think that this provides a more satisfying networking experience for both our members and for the international cohort that is able to gain an idea of the unique aspects of Scottish publishing. We haven’t yet announced who this year’s Fellows will be, but we hope to make the announcement at the London Book Fair.

G: What are the unique aspects of Scottish publishing?

M: I think that we have certain authors and certain non-fiction books that probably would not get published in London because they might be seen as less commercial or perhaps regional. There are good books being published in this country, but often they don’t get enough shelf or review space and then, as mentioned earlier, a lot of writers leave their Scottish publishers to be published in London.

However, there are a lot of debut authors being broken by Scottish publishers and I think these books could be very interesting to international publishers. Scotland presents a different voice and a bit of diversity. I’m not saying that in London there is one taste prevailing – that would be ridiculous – but there are other voices in the UK and that is what we hope to show to the international fellows. 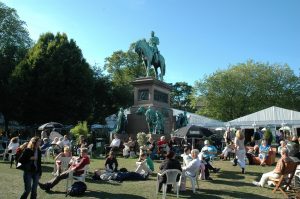 G: What kind of translation subsidies are available to foreign publishers wanting to publishing Scottish authors?

M: We launched our translation programme last year and we have had 2 rounds of funding so far that allowed us to subsidise 19 books. The money awarded goes directly to foreign publishers to help them cover the translation costs. We will run the scheme again in the next financial year that begins in April 2016. Unfortunately, it is not a huge amount of money we offer: last year it was £25k and it will probably be the same next year, but this is a start and we hope to show that there is demand for this type of funding. We also think that it is important to raise our authors’ international profiles and for publishers as well – even though, the original publisher of the novel can also be based London. In fact, subsidies are for translations of Scottish authors and it doesn’t really matter where the original publisher is based. For instance, we funded the publication of Louise Welsh’s A Lovely Way to Burn with Verlag Kunstmann in Germany and that title was originally published in London by John Murray (owned by Hachette).

G: How important are festivals in raising the profile of Scottish publishing?

M: The Edinburgh International Book Festival and literary festivals in general have definitely been an area of growth over the last 15 years. Events are endlessly popular at the moment and there is a huge appetite for meeting authors and hearing talks. The EIBF is also a great way to sells books for our publishers: recently we had a presentation from the festival bookshop manager who said that 25% of all books sold at the festival are published in Scotland, which was very good news for us! It seems that every little town or village now wants to have its own festival, which is great since festivals are a good way of getting authors known and of selling books.