Publishing in Iceland Where Reading Is a National Sport 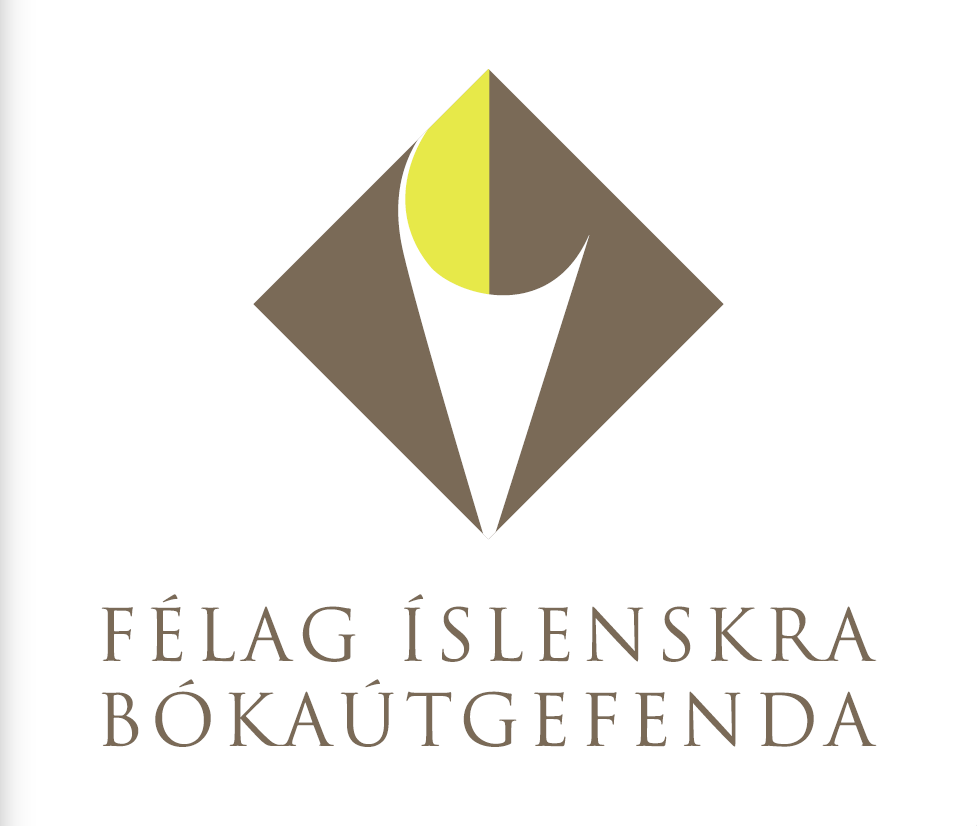 16 Dec Publishing in Iceland Where Reading Is a National Sport

A close up on publishing in Iceland, and the country’s world-famous Christmas book flood

This month, our Publishing Industry Insights series takes us all the way to Iceland to discover more about its thriving literary scene, and to hear about one of its most renowned traditions:  Jólabókaflóð – aka Christmas book flood.

With around 330.000 inhabitants, Iceland is certainly one of the smallest book markets in the world. Nevertheless, it boosts one of the highest rates of books per capita (3.5 books every 1,000 inhabitants!) and Icelanders are famous to be a nation of bookworms. According to a study conducted by Bifröst University in 2013, 50% of them read at least 8 books per year, while an impressive 93% of them read at least one. What is more, according to BBC Magazine, one in ten Icelanders will publish a book in their life!

Despite its small size, Iceland can pride itself of a long-standing literary tradition, dating back to the 13th-century sagas, which represent a stronghold of Icelandic national identity. In more recent times, Icelandic literature came under the international spotlight when novelist Halldór Laxness was awarded the Nobel prize (1955). Nowadays, many Icelandic authors enjoy great success abroad and some of them are widely translated into other languages. Some examples are the crime authors Arnaldur Indriðason, Yrsa Sigurðardóttir, and Viktor Arnar Ingólfsson – to mention but a few.

The effects of the 2008 economic crisis hit Iceland particularly hard. Of course, the book industry was not an exception. However, thanks to its long-standing passion for books, as well as to the deeply-rooted tradition of book gifting (more on this below), the Icelandic publishing market managed to stay strong – in fact, the production of titles has been constantly growing after 2008.

Certainly this success story also owes much to the efforts made to promote literature (and more generally culture) through state-supported initiatives. The Icelandic Literature Centre is in charge of supporting Icelandic literature, both nationally and internationally. It awards translation grants aimed at foreign publishers willing to publish translations from Icelandic, and it even has a grant specifically aimed at translations into other Nordic languages. Moreover, it offers residential grants for translators and travel grants for authors wishing to promote their book in Iceland.

To find out more about Iceland’s love for books we interviewed Bryndis Loftsdóttir, the vice director of the Icelandic Publishing Association.

Giulia: What exactly is the jólabókaflóð? How did this tradition establish itself?

Bryndis: Jólabókaflóð refers to the Icelandic tradition of publishing the majority of new books during the weeks before Christmas. I guess this tradition can be traced back to when the variety of goods available in Iceland was very limited and therefore opting for a book as a Christmas present was a good bet. This limited availability of goods was mainly caused by the restrictive laws on imported products introduced in 1931, some of which lasted for many decades – for instance it wasn’t until 1989 that beer was finally allowed in Iceland!

During that time and up until now, import taxes have been high on many products, especially glamorous or electrical things that could otherwise have become popular presents. The government is currently lowering or abolishing these import taxes, hoping to solve the capital control restrictions that were introduced in the aftermath of the economic crisis in 2008.

Also, I think that the great emphasis placed on book gifting is also due to the fact that Icelanders really enjoy talking about books. After having read something you can pass the book to your friends, and then have a discussion about it with them. You see, there wasn’t so much else to do here – long winters, no exciting weather, no TV in July (up until 1983) and no TV on Thursdays (until 1986). So, reading and sharing points of view on books has always been a sort of national sport. 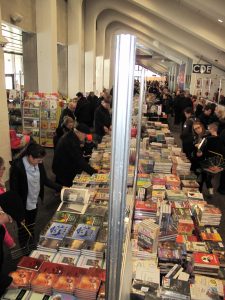 The annual book market held every February in Reykjavik

G: What are the main pros and cons of publishing and marketing the majority of books around Christmas time?

B: Publication all year round has been growing every year for the last 20 years. Around 25% of new books are now published in the first six months of the year, thanks to a growing market for paperbacks and to people starting to buy books for themselves, rather than only as presents. However, the sale of Icelandic books during the first six months of the year is just around 8% higher than the sale in the last two months, November and December.

In 2014, each Icelander bought on average 2.1 books as Christmas presents, and received 1.2 books as a gift! The atmosphere around books during the high tide of publishing before Christmas is quite something. Almost every day you can find invitations on Facebook for publishing parties in bookstores, readings in pubs and cafes and authors interviewed in the media. The Reykjavik Book Fair, organised by the Icelandic Publishing Association and Reykjavik UNESCO City of Literature, was held in the City Hall on 21-22 November to celebrate all the new books of the year.

Moreover, the Icelandic PA publishes a catalogue including nearly all new books that are available in the country.  This catalog is usually delivered for free to every home in Iceland in week 47. You can take a look at this year’s catalog here. Just imagine if a city of 330.000 inhabitants published so many titles every year!

G: What is the ratio between local titles and translated ones?

G: In what ways does the Icelandic government support the publishing industry (e.g. by means of subsidies or through library purchase schemes)?

B: 555 monthly salaries are paid every year to authors of fiction/children’s literature from the government through the Icelandic Artists’ Salaries. However, support for publishers is almost none. There is a government support for our stand at London Book Fair and Gothenburg Book Fair, as well as promotion and translation grants for Icelandic works abroad. It is instead the Icelandic Publishing Association that finances our stand at the Frankfurt Book Fair. That’s about it for independent publishers and our organization. 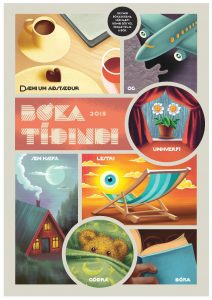 The Directorate of Education handles 95% of all text books for age 6-15, so independent publishers do not get a big slice of that cake. They can however apply for a grant to publish textbooks, but usually most of that money goes straight to authors, which can also apply. Our minister of education has said he would like independent publishers to play a bigger part in textbook publishing and of course that would really make a huge difference for our members.

Libraries only pay authors for book loans and buy their books with discounts from bookstores or publishers.

G: Differently from many countries in Europe, Iceland does not implement a fixed book price policy and it does not apply lower VAT to books. Can you explain the reason(s) for these choices?

B: We have not been pushing for fixed book price. Bookstores and supermarkets use books a lot in their advertisements before Christmas – there is always a “special offer” in sight, and we feel we might lose an unpredictable portion of the market if we were to implement a fixed book price policy. Perhaps we would benefit from higher profits, but no one can tell for sure. You have to remember that the market for books written in micro-languages, like Icelandic, is very close to being too small to even make sense for publishing and is therefore very fragile to any kind of changes.

VAT on books was raised in January this year from 7% up to 11%, when the government raised VAT, not only on books and e-books, but also on music, magazines and food  (all to 11%). At the same time the higher VAT rate was lowered from 25.5% to 24% and import taxes on lots of goods where abolished. Publishers and authors did not cherish this decision, but we are yet to see how this will affect the market.

B: It’s growing, but very slowly. In 2014, Icelandic e-books were less than 1% of the total market share. E-book publishing is growing, although very slowly – for instance there are now 74 new e-books in our catalogue, while it was 56 last year. On Amazon.com you can now find 425 Icelandic Kindle e-books.  Icelanders read a lot of books in English and are well familiar with the English book market. However, we feel that the price of English-language e-books is very low, certainly lower than our market can bear. Therefore the competition vis-à-vis English e-books is difficult to sustain for us.

If you would like to read more about this Icelandic tradition (in Brazilian Portuguese), you can visit this link.