After the arrival in spring 2014 of Managing Director Véronique Cardi, who founded the highly successful publishing house Les Escales merely three years ago, La Librairie Générale Française is making an exciting turn with their new label Préludes. Focusing on original, debut novels both from France and in translation, Préludes will publish 10 titles per year.

At the end of each title, the reader will find three “gateways”: suggestions to (re-)discover other books from the 5,000+ title-catalog of Le Livre de Poche. As Cardi explains: Our “gateways” go well beyond the references proposed by algorithms on online commerce sites. With Préludes, these are thoughtful recommendations, justified by the contents of the book, authors quoted, a genre, a country… […] To pick up on the musical metaphor, we propose a prelude and then several suites or fugues.

The three titles referred to at the end of Préludes’ first publication, The Smell of Cut Grass (Un parfum d’herbe coupée) by Nicolas Delesalle are Foam of the Daze (L’Ecume des jours) by Boris Vian, the main character’s favorite author, Siddharta by Herman Hesse, recommended by the main character’s teacher, and The Summer Book (Sommarboken) by Tove Jansson, which recalls a childhood atmosphere similar to Delesalle’s title. 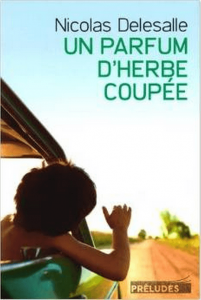 Published on January 7, 2015, it is part of the powerful cultural retailer Cultura’s winter selection, and has been piloted by La Fnac. Moreover, Delesalle’s debut novel has been given a warm welcome by the French press:

This bittersweet debut novel, composed of a clear and musical writing, examines with great tenderness but without nostalgia what remains in each us of the child we were. — Le Monde des Livres

Surely you will recognize some Philippe Delerm in this debut novel filled with happy nostalgia. […] No tears can be found in these pages that you drink like a good wine from yesterday. — Transfuge

This promising debut novel has an evocative power that charms and moves us. — Biba

Nicolas Delesalle in search of his memory. Those who know [N. Delesalle’s] journalistic work will recognize his distance, his humor, but also his seriousness, which is sometimes unconscious regarding childhood memories. — GQ

Nicolas Delesalle knows how to tell, in a few words, all those little things of our existence, that make up almost everything. […] It’s like he has a micro-camera that zooms in on these furtive moments that have very Proustian flavors. — La Tribune du Réseau Presse

Contact us if you wish to receive the English sample and/or French manuscript of The Smell of Cut Grass, we’d be happy to send it to you.