Posted at 13:27h in Articles & Advice by marleen 0 Comments

Supporting Literature in Translation: Alexandra Büchler discusses the past, present and future of Literature Across Frontiers

It is no mystery that at 2 Seas Agency we are passionate about translation, and we know we are not the only ones. Since its foundation in 2001, Literature Across Frontiers has been at the forefront in promoting literary exchange throughout the world; most recently, in April 2015, LAF launched a much awaited report unveiling the current situation of literature in translation in the UK and Ireland from 2000 to 2012 (download the study here).

In order to find out more about LAF’s mission and future plans, we spoke to director Alexandra Büchler.

Giulia: What are LAF’s main activities?

Alexandra: Broadly speaking, LAF fosters international literary exchange and encourages diversity in literary publishing and programming of live literary events by working with a range of partners across Europe and in other regions. We also monitor our field and engage in research into the publishing of translated literature and support for literary translation in order to contribute to an on-going policy debate. The outcomes are published electronically on our website where you can also find our information resources. 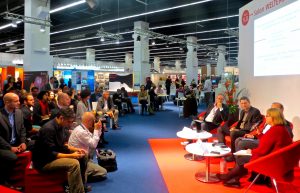 While working with the book sector is at the heart of what we do, our activities are also about creating opportunities for cross-cultural collaboration among writers and translators, particularly emerging ones. This is done mainly through residential workshops in which writers explore each other’s work through direct or bridge-language translation. To date, we have organised over eighty such workshops in some sixteen countries with writers working in over fifty languages. The same principle is applied in our larger-scale projects based on exchange residencies.  An element of collaboration and reciprocity is always central to these projects: Sealines involved twenty writers and six bilingual European port cities, Metropoetica was a project focusing on women’s poetry about inhabiting urban spaces, Word Express involved over sixty young writers from the entire region of South East Europe, and Tramlines paired authors who explored each other’s cites by navigating them through the tram system. The last one inspired the creation of a short story application Lit Nav which is available for free from Apple app store.

Giulia: Do you feel that the status of translated literature in the Anglophone world has changed since LAF was founded in 2001?

Alexandra: Yes, I believe it has. Most importantly, literary translation has become a widely discussed topic with a visible professional community – translators, of course, writers, publishers, literary programmers. The setting up of the Literary Translation Centre at the London Book Fair in 2010 was landmark occasion which gave this community a home at a leading industry event. Today, the LTC is one of the liveliest spots in the book fair with a fantastic programme and big audiences. In other words, translation has been given unprecedented visibility and a support infrastructure with a number of organisations playing a role, many of which have found a permanent home in the Free Word Centre in London – a literature hub and another significant landmark in a relatively recent development which would not have happened without targeted strategic financial support from public and private funders.

The question is whether this “buzz” around translation is evident also in publishing. Our research shows that the number of translated titles has grown by 69% over the past twelve years and the publishing scene is one of great diversity with a number of innovative small independents focusing on translated literature and gathering a steady following. But this is a growth which shadows the steadily growing volume of British publishing, the least receptive to writing from other cultures which still represents only around 4% of books published every year. This outlook is then reflected in the way books are promoted – for example writing can come from outside the English-speaking world is rarely reviewed, British literary festivals can still be quite mono-cultural in their programming and translated literature is not part and parcel of most people’s reading habit. 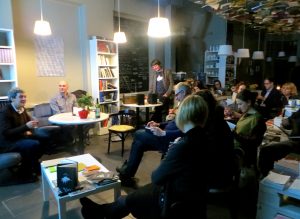 The general scene has changed from what it was ten or twenty years ago and there is a greater acceptance of diversity, but we still have a lot of catching up to do and this is occasionally acknowledged by respected commentators: this year’s International Man Booker Prize judge and renowned author and scholar, Marina Warner, describes the British outlook on word literature as “oddly provincial” while the veteran publisher of translated literature Christopher MacLehose spoke of the “abject incuriosity” of the British in a public debate at last year’s Frankfurt Book Fair. So, although there has been a change, we still have a long way to go if we want to catch up with the rest of Europe on this front. European readers grow up with literature in translation, it is part of the literary canon. This is emphatically not the case in the English-speaking world and will probably never be, but here has been some progress and more diversity in the publication and reception of translated literature.

Giulia: What would you say is the main reasons for this change?

Alexandra: There are many factors which come together and sometimes it is difficult to decide which are the predominant ones, but it seems that changes in arts policy have led to an increasing emphasis on international as an important part of the cultural landscape, and access to international writing is seen as a cultural right. Another factor that has contributed to a wider acceptance or even growing popularity of translated fiction is genre writing and particularly the success of Scandinavian crime or Nordic noir both in print and on the small screen. British TV is not known for screening foreign films, drama or documentary, and having a subtitled series on prime time television is a new phenomenon. But even these dramas and films have had US remakes.

Giulia: What factors have the biggest influence on the translation policies adopted by publishers? In short, why some languages and literatures are so underrepresented in translation?

Alexandra: Each publisher has a different focus and the diversity we are witnessing is due to the work of small independent publishers many of whom started publishing relatively recently and whose outlook is decidedly non-commercial, such as Istros Books, focusing on writing from South East Europe, Peirene Press with their eclectic list of beautiful book objects, Pushkin Press which launched a list of translations for children and young readers, or And Other Stories whose list is based on recommendations of reading groups. The Wales-based Parthian Books and Seren can also be quite adventurous and take a gamble on a Slovak or Basque author. And it is these publishers who fill the gaps: Ismail Kadare may be the International Booker Prize winner but how many other Albanian authors have been translated? Without And Other Stories and Istros Books there would be none. Ultimately, publishers do what they have to do, what they feel passionate about. If you publish a book you don’t believe in, you won’t convince readers it is worth buying and reading. 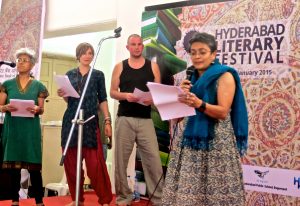 Another factor has been the impact of national bodies promoting literature and supporting translations, and probably also the growing influence of a new category of literary agents who represent an international array of authors, and, last but not least, translators play a role too, assisted by funding available for sample translations which makes it easier for them to pitch titles to publishers.

Giulia: What are LAF’s future projects?

Alexandra: We work on regular projects with partners abroad and in the UK, literary organisations, festivals and book fairs. We are planning a multi-year project focusing on writing and multilingualism in Turkey where there is a very interesting Kurdish literary scene we know very little about in Europe, and especially in English-speaking countries. Another large project we are planning will  examine shared cultural heritage between India and some European countries, and we also have been working increasingly with Indian literary festivals on promotion of European writing. In China, our partner is the Bookworm Literary Festival, and we hope to be able to take more European authors there next year. Of course all these plans depend on available funding and sponsorship.

On home ground we would like to focus on touring of international authors in the UK, especially outside London, and on developing a programme of writers’ and translators’ residencies in Wales. Providing residential opportunities for international authors is a crucial aspect of the kind of dialogue we aim to stimulate. Unfortunately, compared to other European countries, this is another area where the UK lags behind. I wish we had an equivalent of the DAAD programme they have in Berlin or an apartment which hosts writers on a monthly basis like the one managed by Passa Porta Literature House in Brussels. Even tiny and not particularly wealthy countries such as Georgia, Latvia or Slovenia have such facilities and I can’t see why we should not be able to set up something similar in Wales, our home base.