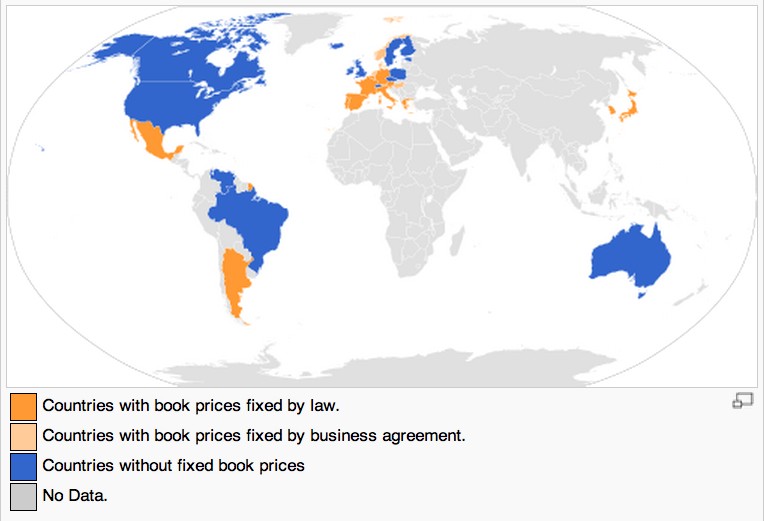 Posted at 17:30h in Articles & Advice by marleen 0 Comments

The Impact of Fixed Book Pricing on Foreign License Negotiations

I spent the better part of my life in countries where book prices are fixed, either by law (the Lang Law in France, established in 1981) or by business agreement, which is the case in the Netherlands.

Only when I started working in international publishing did I fully grasp that book pricing models can differ a lot from country to country. Till then it had been a no-brainer for me that a fixed book price system is there to ensure cultural diversity: it keeps the price of best-selling books high in order to subsidize the sale of more “challenging” and, therefore, less popular books. It further helps independent book stores to survive next to the larger chain outlets. Take the French situation for instance. I have never been in a country where there are so many of the former. Being a book seller in France isn’t just a job, it’s a passion. Stepping into a small, independent French book store is a unique experience: the staff is there to give you personalized recommendations, not from seller to buyer, but from reader to fellow reader. Amazon’s recommendation algorithms might be smart, but they will never be able to replace such personal, hearty advice.

So when at the beginning of my French publishing career I attended a round table discussion between French and American publishers, one of the American participants jokingly referred to the fixed book price in France as a Communist practice, I was stunned. I had never looked at it from that angle. Indeed, even though the United States is not a pure free market economy, the rule of supply and demand is strongly rooted in American society. A (government-)imposed fixed pricing system, which means that prices are not linked to consumer demand, goes completely against this principle. In America, consumer’s paradise par excellence, cultural diversity comes off worst. (Just look at what is currently happening with the Department of Justice lawsuit that accuses Apple and the first five of the “big six” publishers of colluding to raise e-book prices to fight Amazon’s price-bashing practices. One of the accusing parties has claimed that the price arrangement subject of the lawsuit “cost consumers $100 million.”)

Knowing whether a country applies price-fixing is an important issue to keep in mind when selling rights abroad. Why? An offer for foreign rights is based on three elements:

Let’s take a look at the “best-case scenario”: you receive an offer from a country with a fixed book pricing system. What you see is what you get! Even though the definite retail price may slightly vary from the estimation the foreign publisher initially gives, the royalty percentage will be calculated on the very price the foreign publisher has communicated in their offer (less VAT, when applicable).

Now, what to do when you’re dealing with a country that does not apply a fixed book price?

To avoid bad surprises, the best you can obtain is a royalty percentage based on the “suggested retail price,” also known as the “publisher’s price,” the “cover price“, or the “list price“. This is the price the foreign publisher recommends booksellers sell the book for in their store. It is a fixed value, which means you will know beforehand which amount the royalties will be based on. What is more, the percentage will continue to be based on this fixed value during the complete term of contract.

Often, however, foreign publishers prefer to obtain a royalty percentage calculated on the “net receipts.” This term designates the actual amount they receive in their pockets. In that case, when booksellers sell the foreign edition for a lower price than the “suggested retail price,” which they are allowed to, the foreign publisher shares the loss with you. As a result, your income through royalties will fluctuate, which of course you will want to avoid. Yet if you don’t see any other solution, and you do not want the deal to fall through, the royalty percentage should be several points higher than had it been based on the suggested retail price. This will make up for the risk.

To help you determine which of the above strategies to apply when you receive a foreign rights offer, here’s a list of countries* that indicates whether or not they apply fixed book pricing (either by law or business agreement):

As you can see, the above list is far from being complete. Any additional information will be highly appreciated! Drop us a line at contact@2seasagency.com.

*This list was last revised in 2012 and the situation may have changed for certain countries since.