Unlike previous years, my European spring tour didn’t start several weeks before the London Book Fair. Instead I flew straight to London from Los Angeles, to start fresh like a (jetlagged) daisy with the LBF. 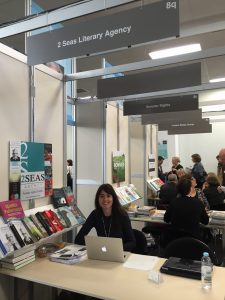 Junior Agent Chrysothemis and I both had a packed meeting schedule all throughout the Fair. As usual my intention to keep a few slots open for possible last-minute meetings and a bit of strolling around outside of the International Rights Center didn’t last very long. Somehow I had understood that the Fairgrounds closed at 7pm on Tuesday and Wednesday. As a result, on both days we were the last ones to be kicked out by the LBF staff leave, together with the persons we were meeting, as it turned out everything officially closed at 6:30pm. Note to self for next year! 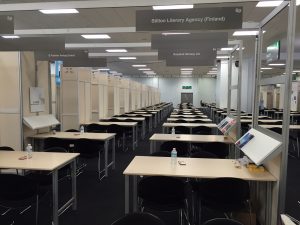 The International Rights Center at the end of day 1: Deserted & ready for day 2

Even though the atmosphere of the Fair wasn’t as intense as last year, when the Hendrik Groen-craze had just begun and our sale to Michael Joseph in the UK was mentioned in The Bookseller’s special LBF edition, we received several offers during our meetings and had plenty of great titles to discuss.

One of my personal highlights of the Fair took place on Tuesday evening. I had organized a “2 Seas dinner” with Chrys and several former interns. 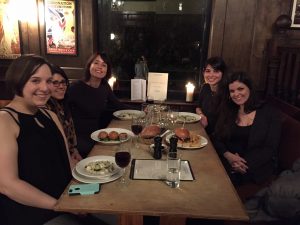 Giulia who continues to write articles for our website is now a PhD student at Edinburgh Napier University, Monica was hired by the Marsh Agency in London, and Jena is finishing her MA in Publishing at UCL. It truly filled me with joy to see all of us united in one London pub—and it was the first time even that I actually met with Jena in person! They all helped get 2 Seas Agency to where it is now, and I will always be grateful for their support and enthusiasm.

After the LBF four more weeks of meetings were awaiting, with a grand finale at another book fair, in Turin. I’d been thinking about combining the London and Turin Book Fairs for a while, having heard amazing stories about the relaxed atmosphere and delicious food of the latter. Since the LBF will be held in March starting next year, it had to happen this year. 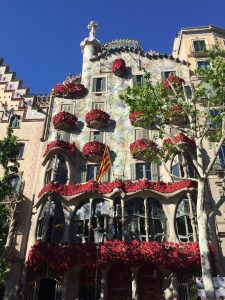 It was my first visit to the Catalan capital as a rights seller. I had carefully planned this trip around a specific date I had also been hearing wonderful things about: April 23, the day of Sant Jordi which coincides with World Book Day. It’s a day on which people buy and offer each other books and roses—what more can you want?

Sant Jordi is the patron saint of Catalonia, and it is a very important day specifically for Catalan publishers. I have been told that they can make up to 30% of their yearly revenue on that one single day of April 23. The preceding week can get a little crazy, as publishers organize a lot of author signings for Sant Jordi. Yet in spite of their busy schedule—right after the LBF—all of them made time to receive me at their offices, for lunch, or for a drink.

Even though Barcelona-based agency SalmaiaLit represents our Spanish rights as a co-agent, I think it is also very important to develop personal relationships with Spanish and Catalan publishers. My visit helped me to better understand the dynamics of the Spanish market, make sense of all the different imprints of Planeta and Penguin Randomhouse (which is quite a challenge ‘from the outside’), and get to know a few new and dynamic independent publishers. After several crisis years, things seem to be looking up again for the Spanish publishing market. Still, everyone stressed that ‘it will never be the same again’—I believe this is the case for many other publishing markets.

The evening before Sant Jordi several parties were organized, which I happily attended of course. Some more new names and faces, and business cards and stories exchanged! 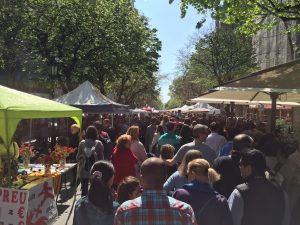 The Ramblas de Catalunya at the day of Sant Jordi

On the day of Sant Jordi, Gaudí’s Casa Batlló was covered in roses. On the Ramblas de Catalunya I was overwhelmed by the number of people buying books at one of the many bookseller and publisher stands, and standing in line to have their book signed by one of their favorite authors. It looked like a sea of people moving down the Ramblas towards the Mediterranean Sea. People of all ages and backgrounds—a lot of families with children—, all buying each other books and roses. It was beautiful and moving to watch.

I was very pleased to see several books we sold into Spain displayed in their Catalan and Spanish editions, in book shops and also at stands on the Ramblas de Catalunya:

Riad Sattouf’s THE ARAB OF THE FUTURE vols. 1 and 2 in Catalan with Ediciones Salamandra (orig. publisher: Allary Editions)

10 days after I arrived in Barcelona I moved on to a short week’s visit to Amsterdam… to be discussed in my next blog post!

PS: During my lunch meeting with the wonderful Malpaso-team at their restaurant, Editor Patricia Escalona mentioned PubHouse, a side-project she recently developed. I am already a big fan: it’s a house exchange webpage for people in publishing. You need to be friends with that person or have someone you know introduce you to them if you want to stay at their place. Agree on the dates and go travel!