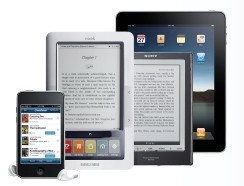 Posted at 20:09h in Articles & Advice, E-books by marleen 0 Comments

E-riginals in Translation, a Global Perspective

The age of digital publishing is here to stay; there is no use in denying it.

Enter the “e-riginal” or “digital original” publication: a digital first (or only) edition. By cutting out the printing, stocking and a large part of the distribution costs, the financial threshold for publishing books in translation drops considerably.

Several US publishers have recently started to publish e-riginal books in translation. Reportedly only 3% of all books published in English are translations, so perhaps this is the solution to tackle this infamous percentage?

Publishing Perspectives recently dedicated a blog post to the ‘most French’ of American publishers, Le French Book, which publishes digital first editions of successful French commercial fiction and non-fiction. American–born founder Anne Trager had been living in France for a long time and was frustrated not to be able to share the great French books she was reading with people at home in the US, as they weren’t available in English: “Then I got my first e-book reading device and shifted to reading e-books whenever I could, and it dawned on me that this would be a great way to get some of the books I love to a wider audience.”

Le French Book launches its first titles this fall, among which the prize-winning The 7th Woman by Frédérique Molay. “So far, just about everyone—readers, other authors, people in publishing and reporters—loves the idea. Generally, people like the idea of having access to more great books and find the French angle enticing.”

Founded in 2009, Open Road Media is another digital first publisher in the US, albeit not specifically for books in translation: “We are always looking to acquire high-quality books, either written in English or in translation. With a great thriller series, for example, readers are not going to care whether the book has been translated or not—it is the voice and action and suspense that count” says publisher Tina Pohlman. They have been successful with several domestic e-riginals from among others Mary Glickman, but have also recently partnered with Mondadori in Italy and Barcelona Books in Spain. Open Road publishes the e-books in English translation and digitally markets all of the titles in the partnership.

Both Le French Book and Open Road Media insist that they are a digital first publisher—as opposed to digital only. The former actively looks for partnerships with traditional print and audio publishers once the e-book is available, whereas the latter works with Ingram Publisher Services and Lightning Source to print and distribute all their e-riginals.

Traditional literary publisher New York Review of Book’s new e-riginal imprint NYRB Lit launched in September 2012: “We are using the digital platform to introduce American readers to books that traditional publishing has bypassed—literary novels and books in translation especially” says Sue Halpern, the series editor who came up with the idea two years ago. It isn’t clear yet whether their e-riginals will make it into print: “We are looking into POD, trying to figure out if it is cost effective. It has been our intention all along that if we see sufficient movement in the sales of a book—which, I realize is fuzzy math but this is all new and we’ll be assessing this as we go along—we will print physical copies and get them into bookstores. But this brings up something crucial about NYRB Lit: we are using the digital platform to build an audience for writers that would not otherwise be heard in this part of the world, and for these kinds of books. If we can do that, then it will make financial sense to go to print. So, in a way, we’re inverting the traditional publishing model, which starts with print, which is expensive, and then goes to digital as a kind of add-on.”

All of NYRB Lit first ten publications are from abroad, with translations from the German (Markus Werner’s On The Edge) and Hebrew (Yoram Kaniuk’s 1948).

E-riginals in translation are definitely setting foot in the US. But what about the rest of the world? Even though the e-book market in non-English speaking countries is lagging behind, digital original editions are gaining market share. Yet, we’ll see that for the moment, publishers play it safe and mostly focus on domestic content.

In Brazil, Greg Bateman of Hondana is importing a highly successful concept that they refined at Vook, which turned Google Corporation, NBC, History Channel, Elle Magazine, Harvard Business Review and Crains among others into e-riginal publishers. For now, Honanda is 100% focused on Brazilian content for the Portuguese-speaking market.

The same goes for Eriginals Berlin, which will continue its activities under the new name Frohmann Verlag. Co-founded by Christiane Frohmann in September 2011, they publish digital originals in German. Although they did publish a title in translation, Bruce Sterling’s short story Black Swan, they haven’t ventured in other translation projects yet. Frohmann states that “since the e-book market in Germany has not developed very much yet (it currently is 1.4 % of the market share), we cannot really afford to publish translations, unless we’re talking about the Harry Potter-series or the Fifty Shades of Grey trilogy.” She hopes the situation will change soon, and indicates that this might happen in the near future: “Germans are very resistant to innovation. The good thing is, once they open up, they get really enthusiastic. E-reading in Germany is on the verge of a breakthrough.”

In China, where nowadays many domestic novels are published as digital first editions, the size of the market isn’t a problem for the development of e-riginals in translation. Rather, China’s bad reputation with regards to copyright matters makes foreign publishers hesitant to cooperate: “We’d like to buy the electronic rights of foreign titles, however, many foreign publishers are not open to sell electronic copyrights to China,” says Mary Wu, international rights manager of Zhejiang University Press. They have been co-publishing STM e-riginal journals with Springer for many years, and are planning to launch an e-book first series of trade books next year. They would like to publish digital original editions of domestic as well as translated titles.

The advent of digital publishing has made the world a smaller place. Rather than fearfully observing the massive changes the publishing world is currently going through, let’s embrace them—and let books travel more easily! Once the e-book market in non-English speaking countries has gained a more important market share, it will most certainly incite an increase in publications of books in translation thanks to the possibilities that e-riginal editions offer.

Check out this article by EJ Van Lanen, Publisher of Berlin-based Frisch & Co: Why I Publish Ebooks, or the Future of Literary Translation. It will give you a detailed view from the inside, including facts and figures.