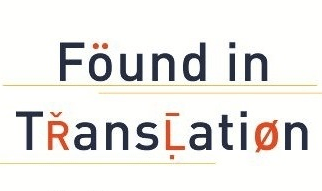 2 Seas Agency in New York, May 2014: Advocating Books in Translation

The 2 Seas team just returned from an extremely exciting week in New York. And I’m not only talking about the contagious big city buzz hovering over the Big Apple: at BookExpo America, the #1 US book and author event, I had my first speaker engagement since 2 Seas Agency’s 2011 launch! And we concluded and paved the way for English-language deals in several of our titles, including a wonderful pre-emptive offer… 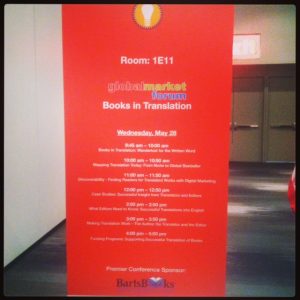 Rather than focusing on a specific country such as Mexico last year and Russia in 2012, the Global Market Forum theme this year was all about books in translation and suitably entitled Books in Translation: Wanderlust for the Written Word. Besides being a speaker at one of the panel discussions, I attended several other sessions that were held that same day.

Journalist, consultant and BookExpo America’s Director of International Affairs Rüdiger Wischenbart had assembled an interesting variety of speakers. In his introductory speech, he noted that “this year, translations are a genre that are a true destination at BEA,” which is a first in the trade show’s 67-year existence. The genre, however, remains a challenge in North America. Throughout the panel sessions, references were made to the famous 3%—the percentage of books in translation among the total number of books published in the US each year.

Besides having to acquire the publication rights, the US publisher also has to invest in the translation itself. Now this is something all acquiring editors face no matter where they are based. Yet besides the foreign submissions, US editors receive a considerable amount of English language manuscripts as well. The pitch or ‘hook’ of foreign titles needs to stand out far above the other submissions in order to “make up” for the additional financial investment and the fact that the author doesn’t live in the US (more on that later).

During our panel discussion we briefly discussed the possibility to obtain grants, which help US editors bear the costs of the translation. One of my fellow panel members, Mr. Ahmed Al Ameri who is director of the Sharjah International Book Fair mentioned that since its launch in 2011, their Translation Grant Fund has helped fund translations of 250 titles whose rights were sold during the SIBF. The unusual aspect here is that grants can be given for translations from any language into any language—not necessarily Arabic. 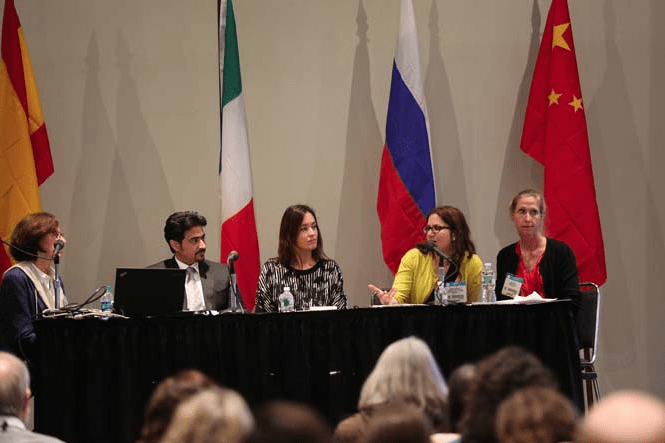 Watch an extract of our panel discussion here:

Another issue foreign rights sellers encounter in the US is the fact that, exceptions aside, US editors often don’t read foreign languages. The latter need to build a network of trusted readers and translators who know their tastes and interests, and vice versa, to help them evaluate a foreign title. It was noted that a growing number of foreign publishers provide good quality English samples—some even invest in a full English translation before they start submitting.

The fact that an author lives abroad and at times doesn’t even speak English also increases the challenge when publishing a book in translation. Having to market a book and reach an audience without being able to count on the author’s participation and/or platform is something many marketing departments aren’t too happy with. The author could of course be flown to the US, but that means a considerable increase in the marketing budget.

Be that as it may, several speakers (myself included) noted that in the last couple of years US publishers seem to be more open to considering foreign titles. Literary scout Maria Campbell even went so far as to claim that some US publishers nowadays actively look out for books in translation, as they tend to be cheaper to acquire than certain English language titles.

And indeed, several translated books have made it “big” on the North American market in recent years. Norway’s Karl Ove Knausgård and Sweden’s Stieg Larsson’s successes were cited throughout the panel discussions. And a younger generation is already knocking on America’s door, as Swiss author and Global Market Forum panel speaker Joel Dicker was referred to as “the new Stieg Larsson.” His title The Truth About the Harry Quebert Affair, published last week with Penguin, was on the desk of virtually every editor I met with while in New York…

2 Seas Agency’s titles increasingly present on the US market

We’re experiencing this increased interest from US publishers for books in translation at first hand. Even before attending BookExpo America, we were very pleased with the number of deals we had closed with US publishers since the start of 2 Seas Agency. Still, as I pointed out in one of our previous articles, we can always do better. Little did I know we were going to close, or pave the way for, no less than three deals with US publishers during our 4-day meeting marathon in New York!

The first deal we closed was with Metropolitan Books, an imprint of Henry Holt and Company, who offered a good 6-figure sum for World English rights in the three volumes of Riad Sattouf’s exceptional graphic novel trilogy L’ARABE DU FUTUR (Allary Editions, May 2014). Published in France only 10 days before the start of our New York stay, this was definitely the most-discussed title of our BEA 2014 catalog. While we were pitching it to US publishers, the title was #1 in the French bestseller lists (all genres and formats included) for the second week in a row, and we already had pending offers from Germany, Spain, Italy, Holland, Brazil and Korea.

It’s still too early to talk about the third deal, but it is one I take very closely at heart! More news soon…