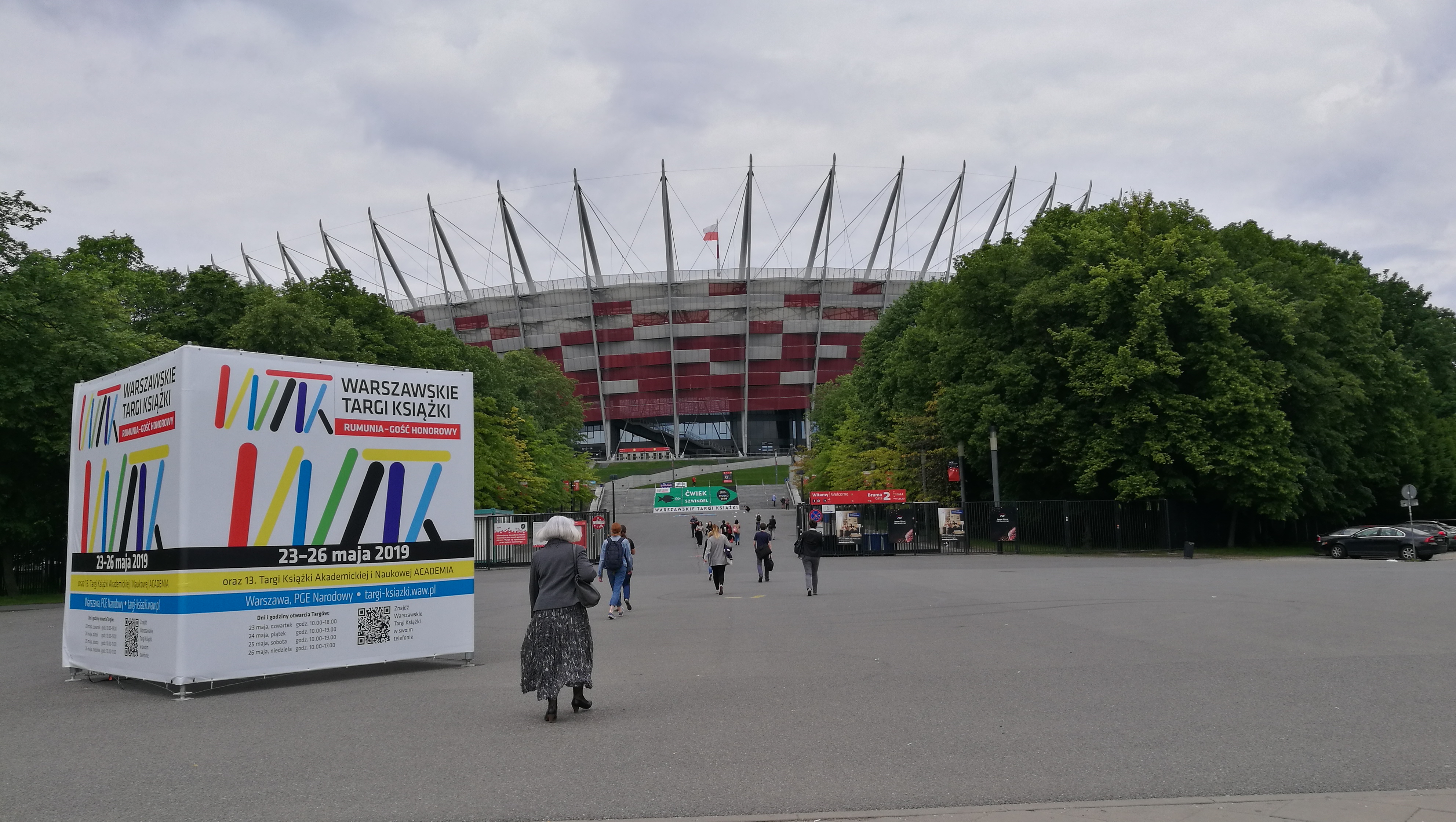 The 10th Warsaw Book Fair – Warszawskie Targi Książkiay took place at the PGE Narodowy Football Stadium from May 23 to 26, with over 800 exhibitors from 27 countries. This international publishing event, where Romania was the guest of honor this year, welcomed over 83,000 people.

The Warsaw Book Fair featured over 1,500 events including meetings with writers, illustrators, and translators, as well as separate sections dedicated to comics and popular science books, and a pop culture festival. The event was also attended by 1,900 librarians and booksellers and 1038 authors, translators, illustrators and other representatives of the cultural world (including the Nobel Prize winner Svetlana Aleksijewicz, Wiesław Myśliwski, and Olga Tokarczuk). 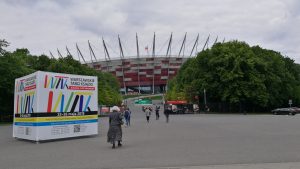 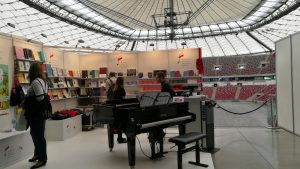 Foreign sales to Poland have increased significantly over the years for 2 Seas Agency, and eager to discover more about the market, we decided to attend this year’s edition. With the help of our co-agents at Graal Agency, I had a very nice schedule with a variety of publishers, that we have already met and/or worked with and gave me an opportunity to also discover newly-created Polish publishing houses.

On Wednesday after a wonderful lunch with the Graal team, I had the opportunity to visit the offices of MUZA who has published already three titles from our list: the bestselling Dutch title THE OFFICE LIFE OF A GUINEA PIG by Paulien Cornelisse (over 150,000 copies sold in the Netherlands, German translation available), THE VIRTUES OF FAILURE by Charles Pépin (65,000 copies sold in France-Allary Editions, foreign sales in 14 countries) and Ellie Grimes’ romantic comedy GOOD GIRLS GO TO HEAVEN, OTHERS GO EVERYWHERE (English translation available) from Préludes Editions. 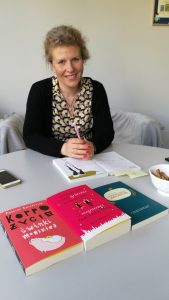 My schedule was fully booked with meetings on Thursday and Friday. Instead of getting a table at the Agent’s Center, I walked around a lot. One of my goals was to better understand what genres every publishing house specializes in, what kind of authors they publish, etc and there is no better way to do this than to visit publishers’ stands. Getting around their stands it was very easy, walking in circles in the sports stadium seemed to make the distances shorter!

Editors were welcoming and extremely happy to show me their new and successful publications, and introduce me to their colleagues. Most of the houses publish a large variety of genres, but there are a few who specialize in one or two specific genres, including children’s, sci-fi and fantasy, and business titles, as well as graphic novels. Kultura Gniewu excels in the latter, and publishes Riad Sattouf’s international best-selling THE ARAB OF THE FUTURE-series.

Created 19 years ago, Kultura Gniewu is one of the pioneer publishers of graphic novels in Poland. 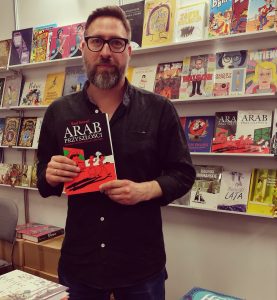 It’s surprising to hear that only 37% of Poles read a least one book last year, but I’m positive that this percentage will increase since the younger generation makes up the majority of these readers. The public attendance at the fair during the weekend was impressive with science fiction and fantasy publishers attracting mostly younger readers. While Thursday and Friday are aimed at a professional audience, the football stadium is a very popular destination for readers of any age during the weekend.

Since 2000, several small publishers have been founded, with an increase of 30% since 2014. Besides the major publishing houses that have occupied the market for decades, smaller independent publishing houses and bookshops have emerged. As a result, the Polish publishing industry is very active and warmly welcomes books in translation.

Even though the number of French-language readers has decreased over the past few decades in Poland – as in the rest of Central Europe – French books have managed to maintain an important position on the Polish publishing scene. There are still quite a few editors who read French and who follow closely what is being published in France.

The establishment of the French Institute both in Warsaw and Krakow, the translation grands they offer, and the stand of the Bureau International de l’Edition Française (BIEF) at the Warsaw Book Fair highlight the strong presence of French culture in Poland. French-focused Polish publishers mostly concentrate on children’s and YA titles, comics and graphic novels. Yet I noticed a renewed interest in contemporary French fiction and non-fiction, treating topical or specific subjects that could be important and interesting for any reader. 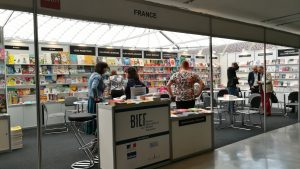 The BIEF stand at the Warsaw Book Fair

Though a little less present in Poland, I did find several Dutch books translated into Polish. At the fair I saw copies of Simon van der Geest’s PAJATY, with Wydawnictwo Format (Spinder, published by Querido in the Netherlands), and at the bookstore chain Empik, Simone van der Vlugt’s NIEBIESKA PORCELANA (Midnight Blue, published by Ambo|Anthos in Dutch)

And last but not least, there is Meulenhoff’s bestselling author Hendrik Groen whom 2 Seas Agency represents worldwide. His two secret diaries are published by Albatros in Poland, who is releasing the Polish translation of his third novel LIVE AND LET LIVE mid-June. 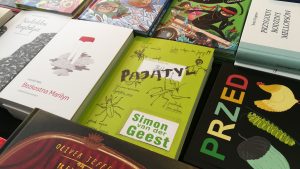 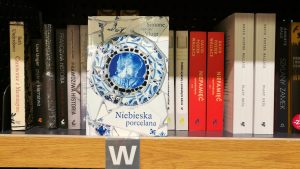 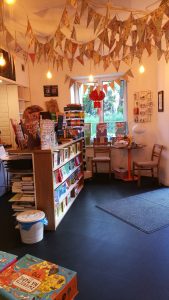 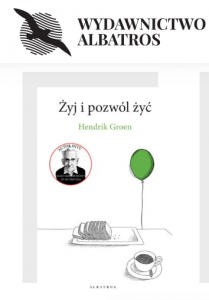 The city of Warsaw

I had some time to be guided around Warsaw, strolling through its parks and visiting its bookstores. I fell in love with Warsaw for its green areas and its big number of bookstores! It is a beautiful city, with its old town, the finest and most picturesque part of the city, the magnificent Royal Castle and the Old Market Square. Having been destroyed by the Nazis in the Second World War, the area was painstakingly reconstructed and is now a Unesco World Heritage site. But Warsaw is also a city with skyscrapers, blended with typical post-soviet neighborhoods. Finally, Warsaw, is the city of the world-famous composer Fryderyk Chopin. It is here that he spent his childhood and early youth. His memory and music is everywhere from monuments and museums, to parks and recitals in the streets. 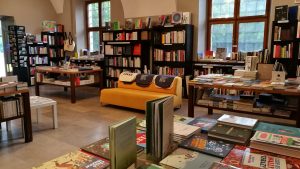 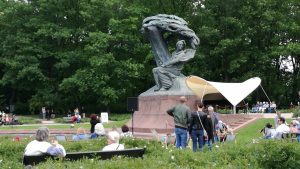 Chopin’s concert at the Lazienki Park 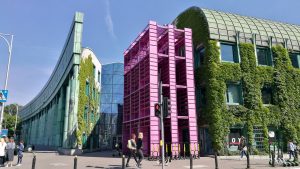 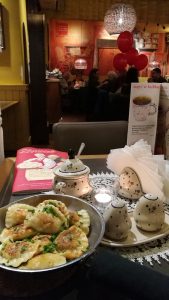