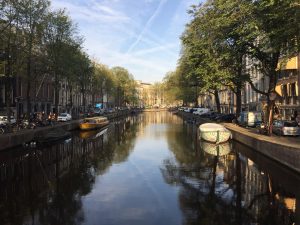 Some impressions on the state of European publishing following our recent travels to Amsterdam, Paris and the 2017 Frankfurt Book Fair.

After a restful summer staycation in Ojai during which I enjoyed the absence of recurrent, crushing heat waves — only on a few days here and there did the thermostat go beyond the 100 °F bar (about 38 °C) — and Chrys and I started to make ourselves familiar with our new rights management database E3-The Rights Manager, I packed my suitcase again for a month-long trip to visit European publishing cities ending at the Frankfurt Book Fair.

First stop: Amsterdam. My stay there included visits to the offices of our Dutch clients Meulenhoff-Boekerij, Hollands Diep and Bertram en de Leeuw, meetings with publishers we sell to, and a lovely catch-up dinner with our former intern Giulia Trentacosti who is now based in Groningen, in the north of the Netherlands. After ending her virtual internship with 2 Seas in 2015 she became a guest contributor to our website, and is in charge of our popular Publishing Industry Insights-series. 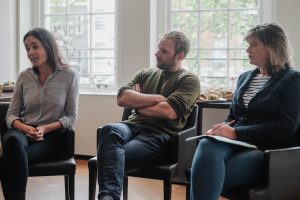 My week of meetings in Amsterdam coincided with the 8th edition of the Amsterdam Fellowship for International Publishers (AFIP) organized yearly by the Dutch Foundation for Literature. Two fellow Dutch agents Willem Bisseling of Sebes & Bisseling Literary Agency and Lolies van Grunsven of Van Grunsven Creative Management and I were invited to take part in the ‘Agents Lunch’ they had organized for the first time. We each pitched a selection of the Dutch books we had high hopes for at the upcoming Frankfurt Book Fair. We were also given time during lunch to talk with the 10 participating international editors. A lovely pre-Frankfurt taster!

The carefully optimistic atmosphere I had felt during my most recent trips to Amsterdam seemed to persist. The Dutch market remains complicated for fiction in translation and the thriller, noir & crime genres—except the big names, as usual. After most publishers have drastically reduced their production over the past few years, sales have been going up again. With the absence of any ‘big’ pre-Frankfurt books from the US and the UK, I noticed a strong interest for non-English language titles. This was the first time I pitched titles to Dutch acquiring editors for new Italian & French clients such as the MalaTesta Literary Agency, Alferj & Prestia, and Actes Sud. Just after I left the Netherlands, the popular Dutch TV show De Wereld Draait Door selected the Dutch edition of Paolo Cognetti’s title Le Otto Montagne represented by MalaTesta as their book of the month, which guarantees a massive jump in sales. Since then we sold rights in Il Ragazzo Selvatico, one of the author’s backlist titles, to its Dutch publisher De Bezige Bij. Many of Actes Sud’s titles also received interest, including the Prix Goncourt shortlisted L’ordre du Jour for which we have received a Dutch offer at the time of writing.

Paris: a complicated start of the year (Marleen) 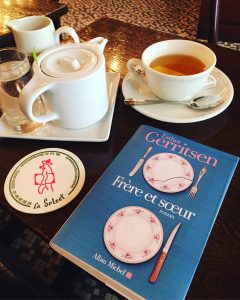 The next leg of my tour brought me to Paris. This time I spent nearly two weeks in the city I called home for 8 years before moving to California. I really took the time to reacquaint myself with the different arrondissements and discovered plenty of recently developed co-working spaces for companies like 2 Seas who have a mobile office, like the cultural center La Gaité Lyrique.

As for the French book market, nearly all the editors I spoke with told me the first semester of 2017 was a disastrous time for publishers and booksellers. Editors saw their books being ordered by bookshops, and a few weeks later the same books were returned. Several of them mentioned that the French elections in May played a big role in this massive drop in sales: potential readers focused on, and worried about, what was going on in French politics (with far-right leader Marine Le Pen making it to the second and final tour) instead of visiting bookshops to buy books. Since la rentrée (the ‘back-to-school’ period in September which also marks the most important literary event in French publishing, la rentrée littéraire), sales have improved quite a bit. Like in the Netherlands, new titles of big names such as Dan Brown, Stephen King and Ken Follett, and the 5th installment of the Millennium series helped a lot. This clearly very unbalanced year makes me hesitate to draw any kind of conclusion. What I can say, is that in France, too, fiction in translation continues to struggle. Acquiring editors are even stricter than before when it comes to selecting titles.

Besides meeting acquiring editors, I spent time with our French clients and met with nearly all the French scouts. I also signed a representation contract for an exciting, last-minute addition to our foreign rights catalog: A Paris, by French It-Girl Jeanne Damas with Lauren Bastide (Grasset, October 2017). Within a few hours of submission, we started receiving offers from foreign publishers which resulted in amongst others a nice pre-empt from Roca in Spain, and other important sales which are still being negotiated at the time of writing.

In light of 2 Seas Agency’s new side-gig, scouting the international book market for LA-based production company Atlas Entertainment, I also met with a few French film and TV rights sellers and brought several exciting ideas with me to ponder on during Frankfurt and beyond. 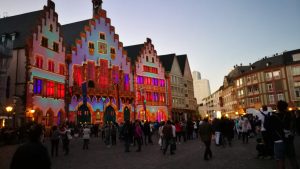 Colorful lights illuminate the medieval Römer building. The illumination is a gift from Frankfurt’s partner French city Lyon on the occasion of the FBF

Back to the Frankfurt Book Fair for the third time, where the French language and Francophone literature was being honored. It felt wonderful hearing people speaking in French everywhere, and having a lot of new and exciting French titles to share.

There were many literary and artistic events going on during the fair, but there was not enough time to visit everything. However, the atmosphere was there, light-flooded, inventive, political, literary and amusing! From the huge Asterix statue at the fairground to the minimalist French pavilion, from empowering panels about women in the literary field to – unfortunately – violent protests by right wing publishers and politicians.

Focusing on the plurality, tolerance and diversity of the written words, the Frankfurt Book Fair this year gave emphasis to the writers and their readers rather than new technologies. As a matter of fact, the main attraction of the fair was a replica of the famous Gutenberg press! Authors enjoyed printing the first and last pages of their books on it. 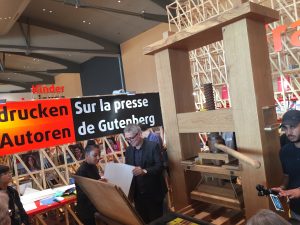 Enormous halls, numerous stands, colorful and beautiful books, the Frankfurt Book Fair is an interesting and major cultural event for book lovers, but also the international publishing industry’s biggest trade fair. With over 7,300 exhibitors from 102 countries and a record 500 tables sold in the Literary Agents and Scouts Center (LitAg), this year’s FBF showed that the global book business is doing better, underlining the importance of words, language and culture, in the turbulent world that we are living in.

Business was booming for trade visitors, and we also had a very successful fair with a full 6-days of meetings, starting early on Monday at the Hessischer Hof, celebrating the evening with two pre-empts at the Frankfurter Hof; and ending Saturday afternoon in a peaceful and quiet LitAg Centre, with an 8-way ongoing auction in Germany!

2 Seas Agency is growing and it is great to be part of it, to evolve through the experiences and relationships we build, to discover new trends, emerging voices, to travel and explore different countries and cultures. 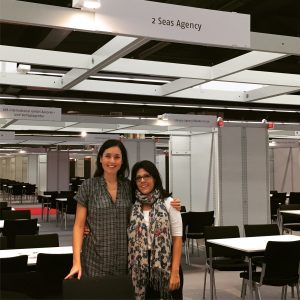 Wrapped up another successful Frankfurt Book Fair, in a deserted LitAg on Saturday afternoon!