The 30th edition of the Turin Book Fair took place from Thursday, May 18th until Monday, May 22nd. 2 Seas Literary Agency’s Junior Agent Chrysothemis Armefti attended the 16th International Book Forum fellowship from May 18th to May 20th. Here are her impressions…

Marleen Seegers attended the Turin Book Fair’s IBF in 2016. She praised it so much that I became very eager to participate in it as well. This year, the 3-day foreign rights trading program took place at the Museo Carpano, on the higher floor of Eataly Lingotto, which was 10 minutes away from the Salone del Libro. This new location had its advantages and disadvantages. There were over 600 publishers, literary agents, scouts, film producers etc. which resulted in a dense network of about 5,500 meetings, and facilitated social gatherings at the restaurants inside, aptly named Eataly. However, participants didn’t anticipate the distance between Eataly and the actual Book Fair in the former industrial warehouse of Lingotto. Thus it was difficult for publishers to go back and forth from one place to the other, giving us no chance to steal some time on our lunch break to visit the book fair.

Despite the fact that there were representatives from all over the world, I mostly focused my meetings on Italian publishers, willing to understand better the market, and discover some small independent houses that we don’t get to see in other international fairs, like London or Frankfurt. Italy’s biggest publisher, Mondadori, was absent, but I met with editors from other major players like Feltrinelli, Sellerio, La Nave di Teseo, Giunti, Rizzoli, Einaudi, Garzanti etc.

I received a very positive vibe about the status of the Italian publishing market, from both big publishing groups and small independent publishing houses. Additionally, the book market in Italy has officially started showing growth after four years of crisis. A slight recovery was observed both in 2016 and in 2015 at a +0.5% and +0.7% rates, with a turnover of 2.530 billion EUR in 2015 and a growth of +0.2% in the following year. A positive turnover but still not enough, compared to the 2011 figures, of a 3.1 billion EUR.

With a new title from Allary Editions that I was pitching, I discovered that nature books are doing very well in Italy, and most of the publishers have a successful collection of books on climbing, nature, forests etc. As a matter of fact, first day back at the office after my trip, we received an Italian offer for CLIMBING MONT BLANC, one day after we started submissions.

Visiting the Turin Book Fair was also an opportunity for me to meet with our Italian clients. Apart from Laura Ceccacci, whose catalogue now we represent in World English, Dutch, French, Nordic and Portuguese rights, I also had the chance to meet with the two other Italian agents we just started working with: Alferj e Prestia and MalaTesta.

These first meetings are always very important, to establish a better connection and discuss subjects that are overlooked by email or skype, or even mention new exciting projects. Alferj e Prestia’s NOTES ON A SHIPWRECK (Sellerio) and SASÀ’S TEMPEST (Chiarelettere) are two of the titles we are pitching in the Netherlands, Nordic countries and Portugal, while MalaTesta’s A DARK STORY, THE BLUE NIGHTS, QUEEN DIDO and other titles from their Spring Catalog are being represented in the Netherlands.

Despite my stay in Turin being very short, I do believe that I managed to make the best of it. Arriving one day before the fair began gave me a whole afternoon to wander in the first capital of Italy, admire its Baroque palaces and piazzas and world-class museums. Some window-shopping at Turin’s most expensive shops under the arcades of Via Roma, and then a stroll through the galleries, cafés and second-hand bookshops at Via Po and Via Garibaldi. A glimpse at Mole Antonelliana, Turin’s Tower, once a synagogue, that has now become the National Museum of Cinema, and then a short turn towards Lingotto, along the banks of the River Po, through the Parco del Valentino that contains a former royal palace, the Castello del Valentino.

Of course, I savoured Italian cuisine, both at the convivial restaurants of Eataly (what a genius, the person that named this place), but also an authentic dinner at Bruschetteria Pautasso, as a suggestion of Italian agent Veronica Gagno who works at the Spanish agency Schavelzon-Graham. 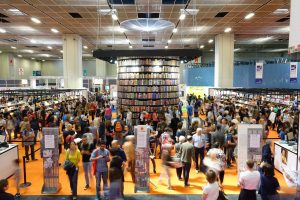 Friday evening, after we finished the meetings, I took the opportunity to visit the fair at the old Fiat factory. This year there were 469 exhibitors and over 1,200 events, breaking all records by selling over 56,000 tickets on the first day alone. Sales also increased by 40% compared to 2016. In total, the Salone del Libro di Torino received over 165,746 visitors!

Publishers such as Feltrinelli were happy to host authors like Pennac, Saviano, Benni and Ford for book signing and other events. Newton Compton announced a 50% increase in sales compared to 2016, stating the increased presence of young adults at the fair. With over 40% higher sales, Sellerio’s stand was crowded by readers. Other publishers such as Marsilio, Editrice e/o, La Nave di Teseo, Neri Pozza, NN Editore, Cortina, Sur, Voland, Fandango, Fazi and Terre di Mezzo declared a raise between 20% to 35%. Apart from book related events, visitors were welcome to attend music concerts, dance shows, theatrical plays, workshops, debates etc.

Despite the competition presented by the upstart rival event in Milan, the Turin Book Fair was still a “major hit“, with all the events being sold out, and 40,000 more than the 127,596 tickets snapped up for the 2016 fair.

The IBF encouraged meetings between large publishing players but also with small independent ones, contributing to the creation of a better visual of the Italian publishing market, the opportunity to meet different people, to explore new territories and deepen relationships with clients. Despite its short duration, this trip was very fruitful both personally and professionally, making me wish to keep making books travel, providing us readers travel alongside them.