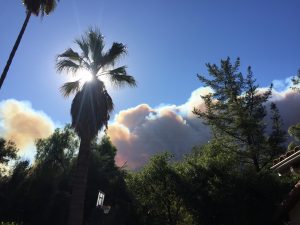 Posted at 20:24h in About US by marleen 0 Comments

By Marleen Seegers—article posted in December 2017

The Ojai Valley, home to 2 Seas Agency’s main office, miraculously survived an agressive wildfire that started on December 4. During our evacuation, our wonderful Jr Agent Chrys who is based in Porto, Portugal kept the fort in good shape. Below account is based on several Facebook posts I wrote during the fires.

We woke up to the Thomas Fire starting to close in on the Ojai Valley. We weren’t aware the fires had already started the night before, when the strong Santa Ana winds were beating down on our house. Those winds aren’t unusual so we weren’t alarmed, even when around 9 pm the electricity went down. It had happened before. What should have alarmed us is the fact that Millie the cat was hiding under our bed and kept her claws in the carpet when we tried to catch her—she wouldn’t stir.

Even so, we went to sleep while the first ridges around the valley were in flames, and woke up to a continued power outage. Then we saw the alert messages we received the night before, and the smoke building up above our valley.

Smoke building up above our front yard on December 5

After several nerve-wrecking hours during which I packed the car—just in case—we decided to leave. No one we spoke to thought our house was in danger, the fires being on the other side of the valley and behind the ridge. But the smoke was becoming unbearable.

When packing, I thought about the things I really had to and wanted to bring. Millie the cat and her supplies: check. Passport & green card: check. Laptop, iPad and desktop computer: check. Some archives and tax papers: check. But then, which clothes and other material belongings to bring? Do they really matter? The answer came to me very quickly and clearly: no. I just took the minimum of clothes to wear for Derek and myself, and he took two of his surfboards (in fact that’s when I knew we were leaving).

Ojai is situated in a valley with only a few routes going in and out, and by the time we left only one of them was still open. Earlier in the morning people had been seen standing in long lines at the gas station, and now a long line of cars was ahead and behind us, filled with people eager to get out.

We found a motel about 2 hours north of Ojai that accepts pets and offers special rates for Ojai evacuees. Far away from the fire and the smoke. So much kindness, we were offered a delicious dessert at the restaurant we were at (not that I could eat much of it). I was up most of the night worrying about our house, and the cat was (and still is) very scared to be in a new place, jumping up and down around the room. But anyway, we are safe . . . 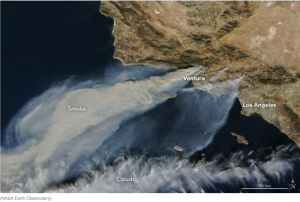 Fires are still going, it is hard to find accurate information online but for now our home seems safe. The winds died down last night but are expected to pick up again tonight/tomorrow and that is dangerous. We are thinking about staying another night here. The air quality in Ojai is very bad due to a lot of ash and smoke, and I am not sure they are letting people back in.

My gratitude goes out to all the firefighters who have been courageously battling the flames since Monday night, they truly are heroes. 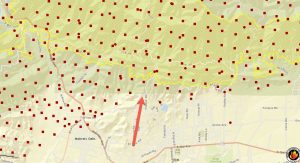 The picture to the rights sums it all up. The red dots are where the fires were last night, the arrow points at our house. We found out about it just before we went to sleep so I spent another sleepless night, trying to detach myself from the belongings we left behind, and most of all, our sweet home. The winds which caused the fires to come unexpectedly from the north have died down and the fire fighters have done a tremendous job protecting all the structures in our street and elsewhere, and at this moment our home is still standing.

Winds are supposed to come back tonight/tomorrow and then hopefully die down again on the weekend. This is so terrifying as we can’t do anything but wait. 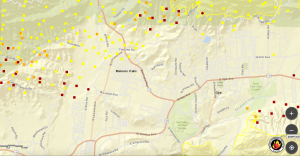 It looks like the most imminent danger has subsided for Ojai. There is still fire north of our street, but nothing like the night from Wednesday to Thursday. The air quality is very poor however, so it looks like we are going to stay away for at least another day. I am starting to feel better, thanks also to the few hours of sleep I got last night.

It turns out that there are about 50 people from Ojai staying at the same motel, whose owners organized a get-together yesterday evening for the evacuees with free food and drinks, and live music. Some lost their homes but the overall atmosphere was joyous, everyone was just happy to be alive. A local pet shop provided free snacks for the many dogs and cats people brought along (some have as many as 4 cats and 2 dogs in their rooms). Again, so much kindness… 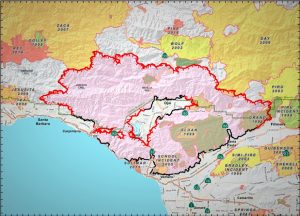 The Thomas Fire perimeter with Ojai right in the middle

The Thomas Fire is currently at 173,000 acres with 15% containment. We are hoping to go back home on Monday as the fires seem to have gone west-bound, towards Montecito and Santa Barbara. These are very populated areas and I am hoping for the best… while there still seem to be some hotspots very close to Ojai as well. It remains difficult to find accurate information online.

I am also trying to understand what kind of supplies we’ll need when back in Ojai because of the toxic air: specific masks, air purifiers, cleaning materials for our home. It won’t be over yet when we’ll be back, but I am so ready to go home!

It really is a miracle that Ojai has been spared. To the right a map that shows the fires that have burnt since December 4, with Ojai right in the middle.

We are home! A little shaken to see our beautiful town covered in (toxic) smoke, and my beloved mountains where I often hike blackened by the fires. But other than that, we are alright. 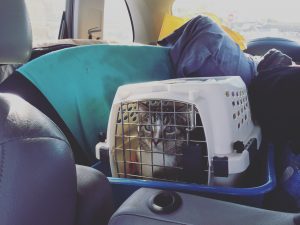 Millie the cat: happy to go home… (her look says, Get me out of here!)

Driving down the 101 took us along Santa Barbara, Montecito and Carpinteria which were covered in a thick layer of smoke. The other side of the road provided an eerie sight as well: the Pacific ocean covered in a yellow-ish haze, the sun faintly shining through. We saw helicopters carrying water fly by, going inland towards the fires.

We couldn’t find any masks nor air purifiers/filters anywhere near San Luis Obispo and some were out of stock even on Amazon. Luckily several stores in Ojai were handing out masks, and we put one on as soon as we could. Before driving home we did some emergency grocery shopping—expecting much if not everything in our fridge and freezer to have gone bad during the many power outages.

Throughout Ojai we see thank you signs for first responders and firefighters; local stores/restaurants/barber shops/massage places/… propose free meals, goodies and services to them. It is heartwarming to see these initiatives, as well as those undertaken for people who have lost their homes, belongings, and jobs due to the fire. All of the Ojai Valley’s many schools are closed till January 2nd (eek! as our neighbor said—they have a 7 and an 11-year-old), and help is being set up for parents who have to go back to work. 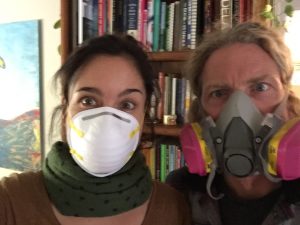 We have our masks; let the cleaning begin!

Our home was alright, apart from the layer of ash surrounding it, and a faint smoke smell inside. We cleaned as much as we could, keeping our masks on. Of course Millie immediately wanted to go outside. Because of the ash and the smoke, and even possible burns, we will have to keep her inside for at least a week, if not longer. She is going crazy again.

To my surprise most of the contents of our fridge and freezer are still intact. I love cooking, and being forced to eat out all the time had started to tire us (not to mention our wallet). Oh, the joy of cooking a home-made vegetable soup tonight!

I am deeply moved by all the heartwarming messages from around the world that I’ve received since the beginning of this trying week. I haven’t been able to react to or answer all of them, but please know that I read every single email, text, Whatsapp/Facebook message, Facebook/Instagram comment, and listened to your voice messages and they were a great support.

Kudos to Chrysothemis who has done an AMAZING job keeping the 2 Seas fort in great shape from her office in Porto, Portugal while I was physically and emotionally dealing with everything that happened since we woke up to the Thomas Fire almost one week ago.

And last but not least, THANK YOU FIREFIGHTERS 🙏 🙏 🙏

PS: For further information on how you can help, visit https://ojairelief.com/.

PPS: News articles covering the Thomas Fire in and around Ojai: